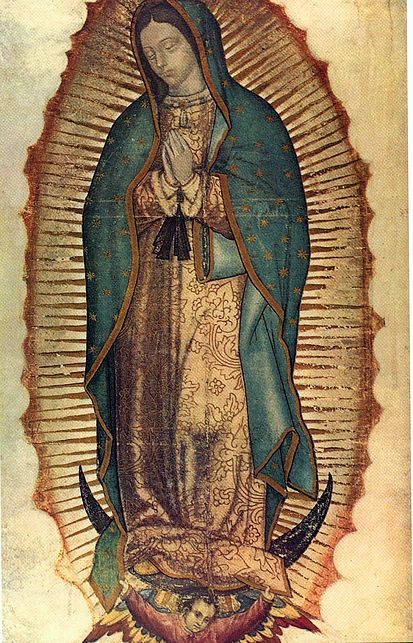 We celebrate Our Lady of Guadalupe today, a commemoration elevated to a feast on the eve of the Third Millennium by Pope John Paul II, who also declared her patroness of all of ‘America’, south, central, and north, as well as the primary intercessor for the unborn.

Appearing to (now saint) Juan Diego on this December day in 1531, while the Protestant ‘Reformation’ was wreaking havoc across the Atlantic in Europe, the Virgin tenderly asked ‘Juanito’ as she called him, and through him asked all of us, ‘Am I not your mother?’, to which there is really only one answer.

Yes, she is our Mother, even in the midst of all the chaos, evil and mayhem of this world, with each day seeming to bring a new variety, oft from a certain religion. Alas, the voluntarism of Islam, Allah an inscrutable God whose decrees are to be carried out regardless of reason, mercy and charity…

We may hope that the souls of the victims may soon be rejoicing in heaven, but we must also have sorrow, and offer prayers, for the victims and, most of all, the perpetrators of these heinous acts.

But we Catholics know a God Who has spoken to us, holds us in His arms as children, Who willed to take on our own humanity, to dwell amongst men, Who has taken on our own vulnerability, our pains and sorrows, the very punishment for our sins, and Who has taken a Mother, who, as she said to her ‘beloved Juanito’, in turn is our mother. I love the detail that Juan heard Our Lady singing, before he saw her with his eyes. And the story of the miraculous, beautiful roses, gathered up in his tilma at the Virgin’s request, which he opened up before the bishop and his companions, at which point, Our Lady’s image appeared…

We know not how many souls Our Lady has brought into the Church through her miraculous image – many millions in the first years after her apparition, more or less converting the entirety of Mexico, mired in child-virgin-sacrificing pagan despair, and many millions in the centuries since. ‘Guadalupe’ in the original language of Juan Diego could well be translated as ‘she who treads upon the head of the serpent’. Hmm.

Her miraculous image sort of ‘floats’ on fragile fabric of the tilma, which by any laws of material physics should have disintegrated within twenty years, but is just as fresh now as it was centuries ago. The image is not painted on, and when observed microscopically, almost seems to disappear into the inexplicable radiant colours on the cactus fibres themselves. As well, Our Lady seems indestructible, as well she is: A worker accidentally poured acid on the tilma in 1785, which miraculously ‘self-restored’, and anti-Catholic masons tried to blow up the tilma in 1921 with 29 sticks of dynamite, which shattered everything around for 150 feet, but left Our Lady’s image, and the ‘fragile’ cloak, perfectly intact.

The image maintains a temperature of 98.6 degrees; scientists have detected a heartbeat over her midsection of 120 beats per minute, that of an unborn child about to be born two weeks hence.

There is in her eyes, only discernible by modern microscopic analysis, reflected not only the image of the bishop and someone else, but, again upon deeper electron microscopy, a number of others as they likely appeared to her as she appeared to them on this day in December, 1531. This effect of images reflected in the eyes was not even known until modern times.

The stars on Our Lady’s cloak mirror the constellations as seen over Mexico, yet not as seen from below, but from ‘above’, as in, looking down on Earth from some heavenly, ethereal realm.

No scientist, as yet, has any explanation for how the image was placed on, or is maintained, and Our Lady of Guadalupe truly is one of those motiva credibilitatis, ‘motives of credibility’, which has disposed countless souls towards the Faith, and increased the Faith of many more.

We are now more than halfway through Advent, when the Light will soon be increasing, and with that, truth and hope, even though the darkness seems, and I say seems, to prevail. In the end, goodness always wins.