I come from the Holy Lands of Ontario.

These are the small towns in which the Irish settled over the 19th century, and built imposing Catholic churches that became a centrepiece for the community.

The phrase “the Holy Lands of Ontario” was coined by Edward Jackman. O. P., in an essay in the 1988 collection The Untold Story: The Irish in Canada (Robert O’Driscoll and Lorna Reynolds, Toronto: Celtic Arts of Canada). He mentions Westport, Mt. St. Patrick, Ennismore, Lucan, Colgan, and Maidstone, stretching the length of the lower province. I would add Guelph as a kind of capital city, its centrepiece Joseph Connolly’s magnificent Basilica of Our Lady Immaculate.

Properly speaking, these holy lands are not only in Ontario. They extend into New Brunswick: St. Michael’s Basilica in Chatham, one of the largest churches in Canada, in what is still a small town. 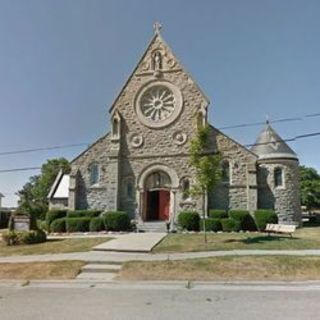 My own home town is Gananoque. The romanesque St. John the Evangelist where I was baptized, with its altar of pink Italian marble, dominates a cliff above the harbour. Downriver a bit, little St. Brendan’s commands the harbour of Rockport from another cliff, a statue of the virgin blessing the moored tour boats and pleasure craft. Forty minutes or so north, the tall steeple of St. Edward the Confessor overtops the skyline of Westport.

These are large, impressive churches for the size of their towns and congregations. They are especially impressive when you consider the poverty of the first Irish Catholic immigrants in the area. Some were granted land in resettlement schemes; but it was forested land, which they had to reclaim from wilderness. Many or most came in the plague ships, famine-wracked, packed in the hold like lumber, dying by the day of typhus or cholera. Many died on the docks. Those who survived had to take any work available. And yet within a few decades they built these huge stone churches. Chartres is scarcely more a miracle.

Most Canadians and even most Ontarians seem unaware of the existence of the Holy Lands. But I grew up with the sense that such places were home, and that even nearby places like Kingston or Toronto were by comparison, if friendly enough, rather soulless. Lacking in something that might as well be described by the word “holiness.”

To understand the sense of those high steeples to any of Irish ancestry, it helps to visit to England or Ireland. In Sheffield, where I studied, the Catholic cathedral can be entered only by a little side street: this was once by law. In East London, the nearest Catholic Church to my hotel was in a basement, invisible from the street. Dublin has two beautiful Anglican (Church of Ireland) cathedrals, and, technically, no Catholic cathedral. Dublin is 96% Catholic.

It was not easy being Catholic whence these people came.

In Ireland, the last penal laws discriminating against Catholics were repealed only in 1920. At their height, Catholics could not vote, could not hold public office, could not own a firearm, could not attend university, could not buy land, and could not own a horse worth more than five pounds. All Catholic education was prohibited. And churches, when permitted, could only be built of wood, never stone.

When my Irish forebears arrived in Canada, Canada was to Irish Catholics a paradise of religious liberty. Finally able to build churches, they were going to make the most of it. And they were going to build in stone; when they could, in granite. And build high.

This is all in great part thanks to another Irishman, a Protestant, Sir Guy Carleton, Lord Dorchester. He fought on the Plains of Abraham, then in 1768 was named, after General James Murray, the second British governor of Quebec. He lobbied in London to ensure that, by the original Quebec Act of 1774, Canada’s first constitution since the French regime, Catholics could hold public office, and the Catholic Church kept all its “accustomed dues and rights.”

This included the Thirteen Colonies to the south. When they arose soon after in rebellion, it was in part because of this Quebec Act, one of the “Intolerable Acts,” as it supposedly enshrined a foreign form of government. Benjamin Franklin and his band sent a delegation to Montreal hoping to find common cause. It was not going to happen. In Canada, Catholics were free. In the Thirteen Colonies, even in Maryland, originally founded on tolerance of Catholics, they were not. That original tolerance had lasted only five years, and had been last repealed in 1692.

Canada as we know it was founded on religious freedom, and was in its day something of a radical experiment in religious freedom. Nowhere else did it seem so possible for Catholics and Protestants to live together in freedom and relative peace. Including, notably, Irish Catholics and Irish Protestants, both of whom arrived in large numbers, and often were near neighbours in these Holy Lands. Of course there were incidents, but there has never been anything here like the troubles seen in Ireland.

The Constitution Act of 1791, also passed on Carleton’s watch, gave Canada the same constitutional arrangement with the Crown as Ireland had been force-fed in 1782: an elected legislature with an appointed executive. But it added the one thing demanded by the Irish reformers at the time, and denied: Catholic enfranchisement.

One can see why the early settlers in places like Gananoque or Rockport or Westport built their little churches so high, and with such pride.

For all the rebellious sentiments in Ireland, for all that the Irish, Catholic and Protestant, were in the vanguard of the demand here for responsible government, men like the Baldwins, Hincks, or the Uniackes, there was no Irish interest in, or participation in, Mackenzie’s call to arms. Papineau’s policy was largely inspired by Daniel O’Connell’s in Ireland; he personally represented a largely Irish riding. But when the patriotes resorted to violence, their Irish support melted away. Canada was an applecart no Irishman wished to upset.

When the few hundred Fenians attacked from the US after the Civil War, they expected, given the huge number of Irish residents, to be met with open arms after an initial skirmish. Canada was to be, in effect, an independent Ireland in the New World.

Instead, they found general resistance, and no local support.

The Irish were grateful for their religious liberty. Canada was their new home. It was Holy Ground.

For some of us, it remains so.