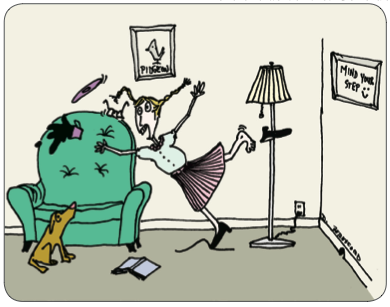 True, he was taken up for a common drunk, but (if you properly appreciate his conversion) you will realize that he did not mind; since the crime of drunkenness is infinitely less than that of spiritual pride, of which he had really been guilty. – The Modern Scrooge, G. K. Chesterton

When we moved into our old house, there were lots of things that needed to be fixed. Some repairs were urgent: we ran out of water the first week, so we had a new well drilled; the mosquitoes were as plentiful inside as outside, so screens needed to be repaired. Other work, while still necessary, got pushed ahead to some indeterminate date in the future: fixing the fences (done), installing electricity upstairs (still to do), dig a pond (done), and fix the hump in the floor (still to do).

The hump in the floor was something that appeared after the first winter. Our house is slowly sinking into the ground and to repair this I will have to replace the rubble foundation along the west wall with poured concrete. One of the first signs of this slow decay was a nine foot ridge in the middle of the kitchen-dining room floor that is about six inches high, depending on the time of year. At first this was bothersome, and I screwed the floorboards down as soon as they popped up. This was futile for the floor just humped up in different places and I was left with large holes in the floor. After about two years of postponing the basement repair, we have all became adept at stepping over the hump.

The hump is the perfect height for sending toy cars down and playing war games with plastic army men. The place of choice for building with wooden blocks is the hump. It has variously been the bank of a river, the seacoast, a mountain range, and the edge of a trench. I could not make a better toy than this hump; plastic car tracks are left idle and cars are raced along the hump instead.

Besides being a great toy the hump offers great entertainment value. “Mind the hump” and “Look out for the hump” are inevitably followed by guests tripping and stumbling as they walk across the floor. Even more fun than stumbling guests are those who fall while carrying plates of food: it is like watching a live performance of the Three Stooges. “You ought to do something about that!” I am told, often with great emotion. I agree, of course, but …

I am secretly delighted with this hump in the floor—it is a source of pride in a weird way, like having the ugliest dog, the fattest cat, the car with the most rust, or the sloppiest hat. There is probably some sort of mental deficiency that is mani- fested by latching on to such perverse loci for expressions of pride. We might think that nobody would knowingly admit to certain defects like being bowlegged or pigeon-toed, and then we meet a mother who brings up in every conversation that her daughter has the widest feet the doctor has ever seen.

I think that this is the real incentive for some foods being favoured by connoisseurs—the more repulsive the dish, the more exclusive it is. Consider cheese. While one can acquire a taste for the sharp flavour of old cheddar, to develop a passion for mouldy cheese requires the added attraction of the bizarre. The stench of the most expensive cheeses is enough to warn most normal people away.

I was given some expensive cheese once, some mouldy brown mush with fluid oozing from the edges. I pride myself on having a brave palate; I can eat blood and tongue sausage without flinching and have even eaten tripe. The taste of one mouthful of that cheese, however, has stayed with me like a nightmare. I don’t know if you have ever turned over a dead animal or not, but depending on how ripe the carcass is there is a whiff that rises so strongly that the air itself changes colour, and a kind of greasy film coats your insides. Well, this cheese tasted like that. I put it into the fridge, and everything picked up the taste, particularly the milk, making the fridge unusable—it has since been discarded. I used a bit of this cheese in some mousetraps, and the house became filled with blow flies. Even so, it was hard to throw the stuff away, such is the instinct of thrift; so I mixed the cheese with dog food for the dogs. They wouldn’t go near it. I finally had to bury it beside the driveway and hoped that that it would not pollute the well water.

Everything I buried was soon dug up by foxes or skunks or something, so that now there is a pit at the side of the driveway which acts as a kind of advance warning to any visitors we might have. As they stumble into the pit after getting out of their cars (add light to driveway, still to do), they are reminded that they must not assume that they are on level ground, either outside or in.