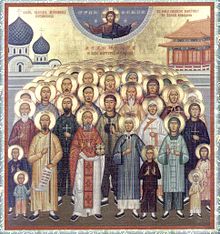 There have been untold thousands of martyrs in China through the centuries, but July 9th is chosen as the day to commemorate them. It was on this day in 1900 that the Chinese government, during the so-called ‘Boxer Rebellion’, ordered the execution of 45 Christian men, women and children, and so is celebrated as the feast of the Chinese martyrs, under the name of Augustine Zhao Rang and his Companions, with whom we recall the untold numbers of Catholics (along with many Orthodox and Protestants) put to death for their faith in brutal ways, often after horrendous tortures, from the 17th to 20th centuries. Ironically, the first official martyrdom, of the Dominican priest Father Francisco de Capillas, was on January 15th, 1648, the same year that the Treaty (or, rather, treaties) of Westphalia were signed, which supposedly instantiated the modern era of ‘religious freedom’ under the principle of cuius regio, eius religio: that the religion of the prince was the religion of the State (with persecution of ‘heretics’, as defined by said prince, still broadly allowed). The only real heretic, of course, is one who divides himself from the one, true religion, but, sadly, the pagan emperors of China saw all Catholics as ‘heretics’ disturbing the peace and order of their own realm, and tried to stamp out the religion which they saw as a rival to their own power (see the words of John Paul II on totalitarianism, which I quoted recently on the Martyrs of Rome under Nero and the Roman emperors).

One hundred years hence, in the Jubilee year 2000, October 1st – the feast of Sainte Therese of Lisieux, who dedicated her prayers as a Carmelite to the missions in China – Pope John Paul canonized 119 martyrs by name (during which ceremony he also canonized Saint Josephine Bakhita). But there were hundreds, even thousands, of others, known to God, and such persecution continues in modern Communist China to this day – no one knows how many. The time is now upon us wherein we too must stand for the truth, and suffer whatever ‘martyrdom’ – white or red – God may send.

Even though Pope Benedict XVI in 2008 declared May 24th as the world day of prayer for the Church in China, composing a special prayer through the intercession of Our Lady of Shesan, under Mary’s role as ‘Help of Christians’- any day is a good day to pray for the besieged Church, not least this day’s feast.

The Church in China is in a troubled state, especially since the long march of Communism under Chairman Mao, who, like so many other nations, established a Marxist government in China in 1949, to disastrous effect, with untold millions displaced and murdered. Soon afterwards, in 1957, Mao, as part of the totalitarian Communist credo to control all aspects of the lives of its ‘citizens’ – which now sounds all-too-close-to-home – also established a government-sanctioned-and-controlled ‘Catholic’ Church (officially, the ‘Chinese Patriotic Catholic Association’), whose bishops and priests would be chosen by, report to and work for the Party. Those who remained faithful to Rome were, and still are, persecuted.

The history of Catholicism in China is a long and complex one, dating back to the 13th century, and the Franciscan missionaries who first evangelized the vast nation, with a rich and complex culture of its own. Cultured and educated Jesuits such as Matteo de Ricci brought the Faith to the highest echelons of society in the 16th century, and the Church maintained a small but tenacious hold in the vast nation, until the persecutions in the 19th century, when the various dynastic emperors, invoking obscure and vague laws against ‘superstitions’, strove to crush the Church which they thought undermined their absolute and, to their minds divine, authority. And the Chi-Coms continue their work, under a different, atheistic, credo.

In the past two centuries, there have been an untold numbers of martyrs, whose blood, as Tertullian wrote in the third century, is the seed of Christianity. Though small in number, the Catholics in China were, and are, exemplary in their fidelity and sacrifice, walking many miles to attend Mass, in the midst of great suffering and even the fear of death. Saint Augustine Zhao Rong was himself a Chinese soldier deputed to escort Catholics to prison, including the Monsignor Gabriel-Taurin Dufresse, who was later executed on the feast of the Triumph of the Cross, September 14, 1815. Augustine – his adopted name – was so impressed by the patience and charity of the good bishop that he himself converted to Catholicism, was ordained a priest, and followed the bishop to martyrdom, along with many others. This was the same year in which , back in France, Napoleon, ‘master of the world’, was to meet his Waterloo. God bides His time, but His time does arrive, as it will for China.

Would that more of us occidental, and all-too-accidental, Catholics, with our debilitating ho-hum attitude about the Holy Sacrifice, gain even a drop of that same oriental zeal. Nothing like a good persecution and a dose of suffering to discover what we really value.

After Mao’s assumption of power, the Church and Catholics faithful to Rome went underground, resulting in the two ‘Churches’ in China, each with its own bishops and priests: the above-ground ‘official’ one, whose bishops are chosen by the government and illicitly ordained, with sermons carefully monitored by governmental agents; and the hidden, but true, Church, whose bishops and priests have been ordained lawfully, but usually secretly, celebrating Mass and the rest of the sacraments in homes, waysides and wherever they are able.

Pope Francis has tried to reach a rapprochement with the government, instantiating a secret concordat to bring the two ‘Churches’ into unity. Yet one wonders how far can he go to find a compromise, without compromising what is essential to the Faith, especially with advisers such as Bishop Marcelo Sanchez Sarondo, chancellor of the Pontifical Academy for Social Sciences, who seems to think China some Platonic ideal of social justice? One may perplex over how this jibes with Pius XI’s clear teaching that communism and socialism are ‘intrinsically evil’, and in no way compatible with Catholic – which is to say reasonable and sane – social principles. The rather aptly-named Cardinal Zen, former head of the Church in Hong Kong, going through its own travails with the Communist overlords, has not minced words, calling the current Vatican agreement a ‘betrayal’, whether a witting one or not. Time and events will tell, but with the continued persecution of Catholics and demolition of churches, the decrees that Xi Jinping’s portrait must hang in every church; that government agents must monitor sermons; and that those under 18 are not permitted to attend church; the signs, to say the least, are ominous.

The main question for the Church hinges on who gets to choose bishops, which has always been Rome’s prerogative, ever since the investiture controversy of the 12th century: The Pope ultimately decides. Relinquishing that right would, as Cardinal Zen never tires of pointing out, spell the demise of the Church in an Erastian morass of Communist complaisance, ignoring the sacrifice of faithful Christians, who have done yeoman’s work in holding the Church together, loyal to the Vicar of Christ and, hence, to Christ Himself.

Father Raymond de Souza claims that China – like most bullies – humiliates others ‘because it can’, but I’m not so sure. There is a method to their apparent caprice; as followers of Marx, Lenin and Stalin, Xi Jinping and his Communists know that they must break the will of those under them, to make them compliant, and make them realize that resistance is futile.

But is it? From the world’s eyes, there may be failure – the destruction of lives, churches, communities – but God brings far greater good therefrom, and, whatever current compromises are written into the Vatican concordat, we may yet see the Church in China rise to great glory. There are over a billion souls in China, so the future of the Church universal hinges to some large degree what happens in that vast and complex nation.