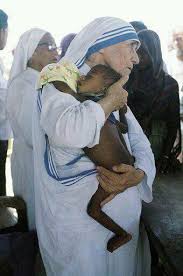 Students have now flocked to university, where they will be subjected to four years of indoctrination in various aspects of modernism, for want of a better and more accurate term. What they will not receive is any sort of integral formation based on the truth, which is to say, with more accuracy perhaps, Catholic. I will have more to say on this, as we begin our own attempt at just such a Catholic intellectual formation here at Seat of Wisdom College. Ora pro nobis.

Mother Saint Teresa of Calcutta, who did not go to university in any sense that we know that term, was nevertheless far better educated than most modern graduates: Solidly grounded in a what we would now know as the basic liberal arts, as everyone did in those days, young Anjeze Bojaxhiu was fluent in five languages, and had a good deal of practical knowledge, medical and otherwise. From the Communist nation of Albania – officially atheist – the young Catholic women at first dedicated her life to education of girls with the Loreto Sisters in Ireland in 1928, at the age of 18, adopting the name ‘Teresa’ after the saint of Lisieux, who is, prophetically enough, the patron of missionaries. Since the French spelling was already taken another sister, Anjeze adopted the Spanish or Latin version.

Young Sister Teresa was posted to teach in India, where she spent twenty years as headmistress of the Loreto school in Calcutta, handing on the truth and forming the young. As time went on, the idealistic sister became increasingly disturbed by the conditions of dire poverty she saw around her, with untold numbers of abandoned people quite literally dying in filth in the gutters – one of the fruits of a pagan culture, one to which we are now returning. It was on September 10th, 1946, that she received a ‘call within a call’, a decisive voice from the Lord that she was to dedicate her life from here on in to the ‘poorest of the poor’, to disobey which would have been, for her, to break her faith. As she put it:

Our Lord wants me to be a free nun covered with the poverty of the cross. Today, I learned a good lesson. The poverty of the poor must be so hard for them. While looking for a home I walked and walked till my arms and legs ached. I thought how much they must ache in body and soul, looking for a home, food and health. Then, the comfort of Loreto [her former congregation] came to tempt me. “You have only to say the word and all that will be yours again”, the Tempter kept on saying … Of free choice, my God, and out of love for you, I desire to remain and do whatever be your Holy will in my regard. I did not let a single tear come.

There was nothing wrong with the ‘comfort of Loreto’ in itself – even if the worldly would find the strict Loreto life itself rather uncomfortable – but Sister Teresa was being called higher, or lower, as the case may be. She wanted at the very least to offer the dying poor a dignified death, to lift them from despair, so that they might meet their Lord with some degree of hope and love in their hearts.

The Vatican approved the diocesan congregation she founded to help the poor on October 7, 1950, the feast of the Holy Rosary, the anniversary of the battle of Lepanto, and now the founding day of the Missionaries of Charity, all of which are somehow related on God’s good providence.

The rest of now-Mother Teresa’s life is well known, and her Order – one of the strictest and most austere in the Church – has attracted thousands of young women looking for that ‘narrow path’ of heroic charity to heaven.

After a long heroic life of, perhaps ironically, great fame and renown, which she always let slide off of her, Mother Teresa died on this day in 1997, overshadowed by the death of Princess Diana a week earlier, offering quite the historical contrast. Saint Teresa would have enjoyed being overshadowed, for she always wanted to remain hidden with her poor, and she now rejoices with them in heavenly riches.