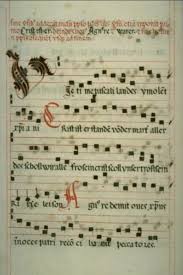 The original Gregorian chant of the traditional Easter sequence, Victimae paschali laudes, which goes back to the 11th century, perhaps to Wipo of Burgundy, but also attributed to others. As someone wrote, the best art tends to be anonymous.

And, of course, Palestrina’s 16th century polyphonic version, which, like all of his music, maintains the simple beauty of the chant, but adds the beauty of contrapuntal harmony:

And the 15th century Easter hymn, Filii et Filae, O Sons and Daughters, composed by the Franciscan Jean Tisserand (+1494), which has a slightly different melody in modern hymnals, but this choir version with organ is hauntingly beautiful:

And Palestrina’s Ad Coenam Agni Providi, his setting of the hymn of Saint Ambrose, with its form taking shape in the 6th century or earlier.

And, of course, we could not pass by the unsurpassed setting of the Marian antiphon Regina Coeli, by Gregor Aichinger (1565 – 1628):