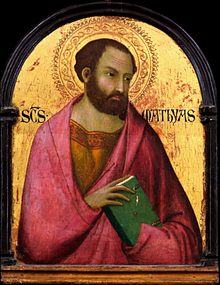 Some are born great, some achieve greatness, some have greatness thrust upon them

So wrote the Bard in his 1602 play the Twelfth Night, and ’tis fitting as a theme for the one who was chosen as the new twelfth Apostle, who was definitely not born into greatness, but had greatness thrust upon him and, once chosen, achieved greatness, a witness to the death and resurrection of Christ, and achieving his own glorious martyrdom, hidden in the mists of history.

In today Office of Readings for the feast of Saint Matthias, Saint John Chrysostom writes ‘neque dixerunt: Elige, sed ostende electum – quem elegeris, inquit‘, that is, the Apostles were not told to choose who was to replace the empty place left by Judas the traitor. Rather, they asked God to show them the one whom He had already chosen.

I half-joke with students that we should all be ‘pro-choice’ Catholics, for who is more in favour of human freedom – which implies being able to choose this or that or another thing – than the Catholic Church? Why should we let the ‘other side’ usurp all the good, juicy words, like choice and freedom and, yes, freedom of choice? Not least on this sombre anniversary of the legalization of abortion in Canada with Pierre Trudeau’s Omnibus Bill (which also legalized sodomy, contraception, no-fault divorce, and gun-control)

We just don’t believe in making bad choices, even if people are still ‘free’ to make them. For every choice for evil and darkness makes us a ‘slave’ of that very sin, and hence, paradoxically, less free. No one is less pro-choice than those who are pro-abortion.

Our choices, as far as we are able in this fractious, dark world, must always be in accord with the truth, our will corresponding with God’s will, manifested in those free choices we make. And the best way to discern what is God’s will is to pray that He manifest to us, through whatever ways and means He chooses. And the bigger and more momentous the choice, the more we should pray and discern.

Not much is known for certain of this new-twelfth Apostle. Acts tells us that he was one of the 70 disciples who had been with Jesus from the Baptism of John, up to His Ascension. s that when the choice came down to two, between him and Joseph Barsabbas, called Justus, Matthias was elected by ‘lots’, signifying that God’s own choice and will can be manifested by various means, even the drawing of straws, so long as we are open to the promptings and counsel of the Holy Spirit, as the Apostles definitely were. As I heard a priest in a sermon, we should aspire to the humility of Matthias, so that we may be attuned to hear the voice of God in our hearts. Take the lowest place, so that He may call us higher, in His own good time and means. It is usually best if leadership and ‘greatness’ are thrust upon us, rather than sought and seized, as is so the custom in our modern political arena. Ambition is not a virtue, but a vice, the seeking of honours and authority we do not deserve, or for which we are not prepared.

God saw that Matthias was indeed prepared for the greatness thrust upon him, and Tradition has he took to his apostolic vocation readily, preaching the Faith ‘to the ends of the world’ ending up in Cappadocia, perhaps even Ethiopia, but suffered martyrdom perhaps closer to home, in the holy city of Jerusalem. Such was his own lot, as Saint Peter prophesied, that he would be a witness, a ‘martyr’, to the resurrection of Christ, which we can attain only through our own passing from life to death to life again.