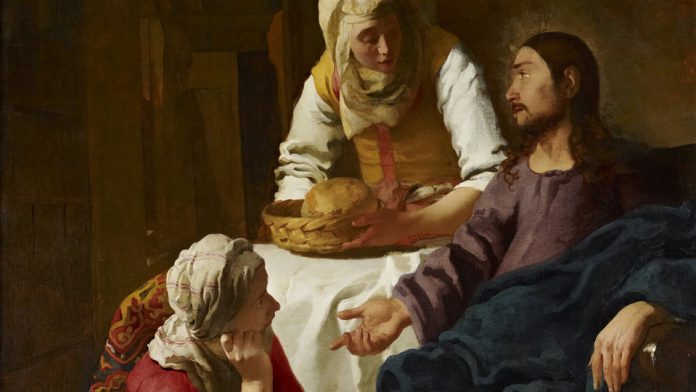 This memorial of Saint Martha, in accord with a decree from the Congregation of Divine Worship last year, now also includes her brother Lazarus, the one raised from the dead, and her sister Mary, leaving aside the controversy over whether she is the same ‘Mary’ as the Magdalene we celebrated a week ago, as some traditions have it. The three were friends of Christ, each in their own respective ways, with Martha signifying the ‘active life’, Mary, at the feet of Jesus, the ‘contemplative’, and Lazarus, well, at one level his early demise points to the fleeting nature of this life, the resurrection, and Christ’s absolute authority over life and death.

As the decree states:

Therefore, the Supreme Pontiff Pope FRANCIS, considering the important evangelical witness they offered in welcoming the Lord Jesus into their home, in listening to him attentively, in believing that he is the resurrection and the life, and accepting the proposal of this Dicastery, has decreed that 29 July be designated in the General Roman Calendar as the Memorial of Saints Martha, Mary and Lazarus.

Together, the three siblings formed a household, and it may be fitting to meditate upon marriage and family life, which is in a crisis in our age. I suppose marriage is always in crisis, and perhaps itself is a crisis in some sense, but things seem particularly bad nowadays, with anecdotal accounts of divorce (sometimes called ‘family’) lawyers running a brisk trade.  Our Lady of Fatima purportedly revealed to her young visionary Jacinta that many marriages are not willed by God, the truth of which may be borne out by a mere cursory glance around the world.

Before we turn to the saints of the day, this is the anniversary of what seem to have been two such ill-fated unions. On this day in 1565, with the Protestant revolt raging through the British Isles, the Catholic monarch, Mary, Queen of Scots, married her first cousin, the dashing but dissolute ‘long lad’ Lord Darnley – he stood over six feet, tall for that age – with whom she was irrationally besotted. Mary had previously been the wife of Francis, the King of France, who was short and sort of stubby – Mary was also abnormally tall for a woman of that era, one inch under six feet, quite beautiful and accomplished.

Even so, Mary’s first union seems to have been a happy one, for a true marriage looks not with the eyes of man, but of God, a joining of minds and hearts. With their marriage intended from childhood, Mary and Francis had been brought up together, and they ruled France well and justly. Sadly, the young king died of an ear abscess on December 5, 1560, leaving Mary a young, grief-stricken widow, and we may believe it so. For is not first love usually the truest love?

Her second marriage to Darnley was not so blessed. They bore one child, who was raised Protestant, the future James the I of England and the VI of Scotland, although some dispute his paternity, claiming he was sired by David Rizzio, Mary’s Italian private secretary, whom Darnley soon had strangled in front of the pregnant Mary. (James it was who sponsored the English translation of Scripture named after him, and who is regarded favourably in Whiggish history, even if not so much for the Catholic cause in England).

One may read the convoluted and tragic events soon after the marriage, that led to Darnley’s own mysterious murder, being found smothered on the lawn after the house in which was staying was in was blown up; Mary’s even more mysterious marriage in quick succession to the Protestant Bothwell, who was the primary culprit in that murder, and Mary’s eventual beheading – contrite and repentant at the end – at the order of her own cousin, Queen Elizabeth. To paraphrase another famous Scotsman, Ah, what a tangled web we weave, when we love, without God’s leave.

We also may remember the fairy-tale wedding of the young free-spirited schoolteacher,

Lady Diana Spencer, to Charles, Prince of Wales, on this day in 1981, an extravaganza which cost an estimated $48 million – which was a fantastic sum of money back then. There is a statistic that the more is spent on a wedding, the less likely the marriage is to survive, which bears some pondering in the bloated enterprise ‘weddings’ have become. But, more to the point, Charles and Diana too seemed ill-suited, coming from different backgrounds, milieux, tastes and proclivities. As but one small but significant point, her favourite music at the time was Duran Duran, whose Brit new wave sound we may presume grated upon the ears of Charles. On the flip side, his and his family’s stiff royal-ness, all the etiquette and publicity, was a strain to Diana, used to a slightly more private and laissez-faire existence in a flat with her girlfriends in London. Whatever went on, we all know the tragic outcome: Separation, divorce, and Diana’s death in a high-velocity car crash in a Parisian tunnel, with her rich Muslim boyfriend, Dodi Fayed, fleeing the paparrazi in late August of 1997, obscuring Mother Theresa’s own passing on September 5th. But that is another story.

So back to Saint Martha and Mary. Any true marriage requires the spirit of both saints: First and foremost the contemplative outlook of Mary, who chose the ‘better part’. For any marriage to succeed, it is necessary that couples must first lead each other to heaven by prayer, the sacraments, not least holy Mass and frequent Communion, all that is entailed in listening to the ‘word of God’ at Christ’s feet. But family life also needs the practical dimension of Martha, ‘busy with many things’, ordering means to the end, building an oikonomia, a household, a hearth and home, where children may be raised in a stable and secure environment, fed and watered, taught and matured, brought to what heights of perfection they may reach. As the ever-practical Saint Teresa of Avila quipped, God must be found amidst the pots and pans.

The problem, to which Our Lady may have been referring in her warning to Jacinta, is that most people seem to have little clue of what marriage really is: Not a romantic infatuation, or a hotbed of sensual delights, or even a mutually economic ‘partnership’, a refined business merger, to be dissolved when any one of these ceases to be, or be what one thought it might.

Rather, marriage is a covenant, in which two souls promise to bring each other, and their children, to heaven, who will stick things out, through thick and thin, in joy and friendship, in all the graces and blessings, but also, and even more so, in all the suffering and sacrifice and whatever disappointments, disdains and antipathies may arise.

For we must keep firmly in mind that marriage, for all of its importance, is only for this life, a transitory reality. We are all destined, if we cooperate and so choose, to be one day like the ‘angels in heaven’. Some are called to be so here in this life, in celibacy and continence, in religious or consecrated life, or as best they can in a single life, whether chosen for some greater good, or thrust upon them by circumstances beyond their control, a situation ever more common in our fractious, broken world. While still others – the majority, still – journey through the the joys and sorrows, the merry mess and morass of family life.

The key is that in whatever path we may be called, we all must, follow both Mary and Martha, keep our eyes on the prize, the goal of all our striving, which Lazarus’ being raised from the dead shows us. As Christ implied in the choice of the ‘good part’, if we lose sight of that, everything else – marriage included – falls apart.