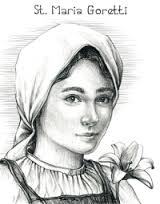 On a hot and sweltering July 6th in a small farming town in the fetid area outside of Rome, one hundred and four years ago today, a young maiden of not-yet twelve years old was viciously stabbed fourteen times with an awl by an eigtheen-year old Alessandro Serenelli, enraged by frustrated lust, because she refused to submit to his sexual advances.

Scripture in Psalm 91 speaks of the ‘noonday devil’, which in the tradition has come to signify the lust that arises in the heat of the day, often as a man takes his siesta. It is connected with sloth or acedia, a spiritual sadness that seeks solace in sensual pleasure, against which the early Fathers of the Church warned.  We see its tragic consequences in the story of King David, listlessly wandering around the roof of his palace while his men are off at war, when, ‘late one afternoon’, the bored King voyeured the disrobed Bathsheeba bathing next door. We all know the adultery and  murder which followed.

Our world has accepted lust as normal, and does not even use the term.  In fact, as I wrote in a previous article, any deviancy is fine so long as you have ‘adult consent’, but one need not ponder long to realize that ‘adult’ and ‘consent’ are rather vague terms.

Alessandro Serenelli was addicted to pornography, in the form it existed in early 20th century Italy, with photographs and drawings and his own interior imaginings. Because Maria Goretti’s father had died, her family had to move in with the Serenellis.  Alessandro was thus in close propinquity with the beautiful and virtuous young girl, developing quickly into an attractive woman.  Rather than try to court her honourably, which, who knows, may have been possible, the young man allowed himself to be taken over like King David of yore by the ‘noonday devil’.

The world has, of course, normalized pornography, with the feting of Hugh Hefner, his ‘Playboy’ mansion filled with beautiful sad and tragic women who know not their fate.  His deviant lifestyle is raconteured in rock songs and films, as something both alluring and humorous. Every guy ‘does  it’, so why not just accept it, bring it maintstream, make a profit, ensrhine it as a profession.

Even more so, at a deep spiritual and psychosexual level, is pornography evil and ‘bad for you’.  One is at least opening oneself to demonic powers. Chastity is defined as the “successful integration of sexuality within the person” (CCC, par. 2337).  Lust, its opposite, is the dis-integration of the person, to the point where he will even commit murder to get what he wants.  Besides deep hunger, nothing so motivates a man, and it is especially men, like the sexual drive.  And when it becomes detached from reason and virtue, the whole person unravels.

The townspeople, when Maria’s bleeding body was discovered, gathered to lynch Alessandro, but the police intervened. Maria took 24 hours to die, after unsuccesful surgery without anasthesia.  She forgave her murderer before she passed into eternity.

Alessandro was sentenced to 30 years in prison, commuted from a possible life sentence, or even death, due to the difficult circumstances of his upbringing and the pleas of his mother. For years, he remained uncommunicative and unrepentant, until Maria, as he said, appeared to him in a dream, giving him lilies, a sign of purity, which ‘burned in his hands’.

He slowly and gradually began to see the evil of what he had done, and at the end of his sentence, he went first to Maria’s mother Assunta to beg her forgiveness.  Alessandro joined the Capuchin Franciscans as a lay-brother, and spent the rest of his life in humble work, prayer and repentance. He was present with Maria’s family at her canonization in 1950 by Pius XII.

As a good priest friend of mine recently mentioned, it is providential that the Pope put forward Maria Goretti as a ‘martyr for chastity’ at the very dawn of the sexual revolution, when all hell would quite literally break loose, a hell in which we are still living. Peruse a recent very honest article by Ann Maloney (which I had trouble reading, and it still stays with me) describing the sad and irrevocable, and sometimes horrific, effects of the ‘hook-up’ (read: lust-driven) culture, particularly on  young women.

As we see in Alessandro, there is always time to turn back, and hope for all of us. We should pray to Saint Maria that our culture may escape from the snares of the ‘noonday devil’, and recapture the joy of chastity and friendship, which is the only way to true sexual intimacy in the covenant of matrimony.  Anything else is a lie, which some of us learn, if we learn at all, like Alessandro, the hard way.