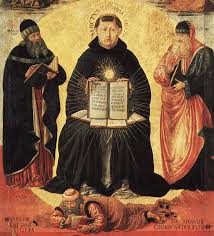 The ultimate point of teaching is to transmit the truth that is in the teacher’s mind (which he should know clearly) into the mind of the student.  Ambiguities, double-entendres, irony, bombast, hyperbole and so on are essential in literature, poetry and drama, and one can ‘teach’ through these modes, but, at the end of the day, a teacher must be clear and direct, saying what he means to say with an economy of words.

That is why the Church has adopted the scholastic method as the primary way to do theology, and has also put forward the greatest proponent of this method, the thirteenth century Dominican Saint Thomas Aquinas, as the patron of theology, whose method and doctrine should be studied and internalized by every student of theology (and, by extension, philosophy).  Since we all should know some theology and philosophy, that means Saint Thomas should to some extent be studied by all.

People today often mock or disdain Saint Thomas (if they have heard of him at all), and his magnum opus, the Summa Theologica, as dry and boring.  It is nothing of the sort, and they mistake what Thomas was trying to do, which was to seek and present to his readers the truth of philosophical and theological principles as clearly as possible, striving to get to the first principles of every question and topic he considered relevant.  After reading through a ‘question’ in the Summa, with the requisite labour necessary, one really does understand the topic far better than when one began.  This in turn leads to further questions, and an extension of the topic.

Erwin Panofsky, in his fascinating 1951 study Gothic Architecture and Scholasticism (a highly recommended read) claimed that all of our sciences owe a great debt to Saint Thomas, for how we study and present information is basically ‘scholastic’ in method, dividing our books up into chapters, subchapters, sections, subsections, all according to topic, so that we truly understand the subject in its first principles, or as close as we can get given our level of education and expertise.

The Church has always taught that a disciplined study of the thought and method Saint Thomas Aquinas is one of the best ways to train the mind to think clearly, and analyze any topic.  That is why his works and thought are required for all students of theology, as was affirmed as recently as the Vatican II decree on the training of priests, Optatam Totius:

…in order that they may illumine the mysteries of salvation as completely as possible, the students should learn to penetrate them more deeply with the help of speculation, under the guidance of St. Thomas (S. Thoma magistro)

Saint Thomas is again prescribed in the decree on education, also from Vatican II, Gravissimum Educationis, as the patron of all students:

In those schools dependent on her she intends that by their very constitution individual subjects be pursued according to their own principles, method, and liberty of scientific inquiry, in such a way that an ever deeper understanding in these fields may be obtained and that, as questions that are new and current are raised and investigations carefully made according to the example of the doctors of the Church and especially of St. Thomas Aquinas there may be a deeper realization of the harmony of faith and science.

A renewed insistence upon the thought of the Angelic Doctor seemed to Pope Leo XIII the best way to recover the practice of a philosophy consonant with the demands of faith. “Just when Saint Thomas distinguishes perfectly between faith and reason”, the Pope writes, “he unites them in bonds of mutual friendship, conceding to each its specific rights and to each its specific dignity”.

And, later in the same encyclical:

It should be clear in the light of these reflections why the Magisterium has repeatedly acclaimed the merits of Saint Thomas’ thought and made him the guide and model for theological studies. This has not been in order to take a position on properly philosophical questions nor to demand adherence to particular theses. The Magisterium’s intention has always been to show how Saint Thomas is an authentic model for all who seek the truth. In his thinking, the demands of reason and the power of faith found the most elevated synthesis ever attained by human thought, for he could defend the radical newness introduced by Revelation without ever demeaning the venture proper to reason.

Many more teachings from the Magisterium on the fundamental importance of Saint Thomas’ thought could be adduced.   The modern Church would do well to heed these words, so that optimal clarity may be achieved in her official pronouncements.

In other words, the Church could do with more ‘scholastic’ thinking (which means rigorous and clear).  I do believe that Pope Francis is the Pope chosen for our times, but, as I alluded in my post on his recent encyclical, some of his statements leave us in some degree of ambiguity.  Perhaps he intends this, to ‘shake us up’ a little, but one way or the other, certain things he says could use further clarity, either on our part in understanding what he says, or on his part, in clarifying some of the points he makes.

I will close with a couple of examples:

In a speech on his visit to Turin last June 21st, Pope Francis went ‘off script’, and apparently condemned investment in the arms trade.  Here are his words:

It makes me think one thing: people, leaders, entrepreneurs who call themselves Christians, and manufacture arms! This gives rise to some mistrust: they call themselves Christians! “No, no, Father, I don’t manufacture them, no, no…. I only have my savings, my investments in arms factories”. Ah! And why? “Because the interest is somewhat higher…”. And being two-faced is common currency today: saying something and doing another. Hypocrisy….

Does the Holy Father mean to say that manufacturing or investing in ‘arms’, which presumably means weapons, guns, bullets and so on, is intrinsically evil?  Or only sometimes evil?  As Father George Rutler points in an insightful essay in Crisis (where he also takes the Pope to task for criticizing the Allies for not ‘bombing the railways that led to the concentration camps’), the Swiss Guards who protect the Pope use automatic weapons.  And self-defense is still a valid moral principle, and oftentimes a duty for those who have the obligation to protect others.  So is just war theory, and presumably one must fight such wars not just with men engaging in hand-to-hand combat, but with ‘arms’, as the opening lines of the Aeneid make clear.

Here also is the Holy Father recently on divorced and remarried Catholics in his August 5th audience:

In these decades, in truth, the Church has been neither insensitive nor lazy. Thanks to the in-depth analysis performed by Pastors, led and guided by my Predecessors, the awareness has truly grown that it is necessary to have a fraternal and attentive welcome, in love and in truth, of the baptized who have established a new relationship of cohabitation after the failure of the marital sacrament; in fact, these persons are by no means excommunicated — they are not excommunicated! — and they should absolutely not be treated as such: they are still a part of the Church.

Further, it is true that a non-married cohabiting couple are not ‘excommunicated’, for this is a specific canonical penalty for certain heinous crimes against God and man (abortion, desecration of the Blessed Sacrament, etc.), and not for grave sins in general.  However, fornication and adultery are still grave sins, and by living in a way that so contravenes the moral law, such ‘couples’ have set themselves ‘apart’ from the community, both by the manner of their lives and the public scandal that they offer.  Certainly we must show them charity, but we also must beware the oft-neglected sin of complaisance, wherein we ‘please’ them in the evil they have done and continue to do.

Need I rehearse the Holy Father’s rather ambiguous closing speech on October 24 at the recent Synod on the Family?  Here are a few excerpts:

It (the synod) was about making clear that the Church is a Church of the poor in spirit and of sinners seeking forgiveness, not simply of the righteous and the holy, but rather of those who are righteous and holy precisely when they feel themselves poor sinners.

It was about trying to open up broader horizons, rising above conspiracy theories and blinkered viewpoints, so as to defend and spread the freedom of the children of God, and to transmit the beauty of Christian Newness, at times encrusted in a language which is archaic or simply incomprehensible.

First, we do not really ‘feel’ ourselves sinners but, rather, discerning with our conscience, an act of reason, we know we are sinners, and we should strive for clarity and certainty on our moral state.  Sure enough, feelings are involved, but they are secondary, and must be moderated, along with our actions (such as whether to go to Confession or Communion) in the light of reason.  Also, which language is ‘archaic’?  Scholastic terms, perennially adopted and prescribed by the Church?  Why might this be ‘incomprehensible’?  Is another language, or other terms, more comprehensible?  What might these be?  Who are the people holding the ‘conspiracy theories’ and ‘blinkered viewpoints’?  What is doing the ‘blinkering’ (the scholastic, philosophical language?), and will removing such blinkers truly provide us with more ‘freedom’?

The Holy Father at the end of the speech does warn against the “danger of relativism or of demonizing others”, but then seems to create more ambiguity two lines later with his claim that the “true defenders of doctrine are not those who uphold its letter, but its spirit; not ideas but people; not formulae but the gratuitousness of God’s love and forgiveness”.

The distinction between the ‘letter’ and the ‘spirit’ of the law is a fine one, which Saint Thomas does discuss with some degree of clarity in the context of human positive law, to which there are exceptions, not of divine or moral law, to which there are no exceptions.  The Holy Father does conclude by emphasizing that such a ‘defense of doctrine’ “means upholding all the more the laws and commandments which were made for man and not vice versa”.  But which laws and which commandments, and what to do with his aforementioned spirit and letter?

These are some of the distinctions Thomas would have made in writing a question on divorced and remarried Catholics, investment in the arms trade, reception of Communion for those in ‘irregular’ situations, or whatever other topic comes up.  For it is said that the mark of a trained intellect is the capacity to make the right distinctions.

The words of the Pope carry a lot of weight, even when he is not speaking ex cathedra or authoritatively, which is why Popes rarely ever gave impromptu interviews or went off-script.  However he speaks, the Holy Father, the rest of the Church, and, indeed, all of us should imitate Saint Thomas in striving for clarity and simplicity, so that the truth may be presented in all of its splendour without obscurity or misunderstanding.