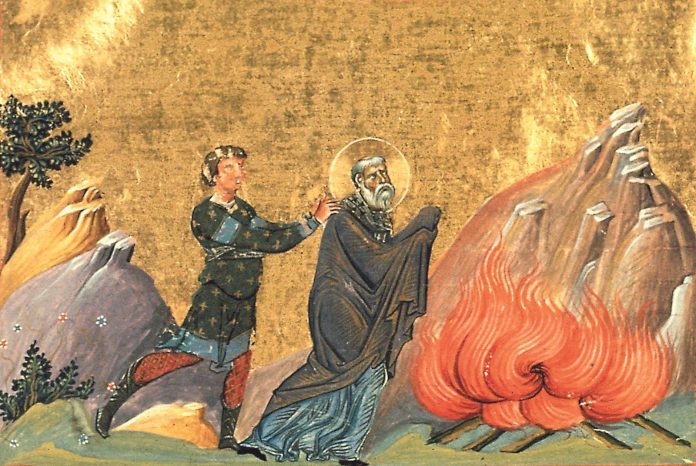 While we’re on the topic of clarity, an excellent read is this recent piece by Gerhard Cardinal Mϋller in First Things. Quite a limpid, and we might add, bold presentation of the only orthodox interpretation of Amoris Laetitia, upholding the natural and divine law doctrine that the sexual union is lawful only within a canonically valid marriage, and gravely sinful outside of such, regardless of one’s ‘conscience’ (see the last column for the cases of invincible ignorance, which do not obviate the ‘objective sin’ aspect).

For reasons that are of course not made public, Mϋller was removed as head of the Congregation for the Doctrine of the Faith last July, and has declined another curial position in the Vatican. I suppose he thinks he can work and write more freely outside the system than within, and I wonder what this implies.

Commemorating a simpler time in the nascent Church, today is the memorial of Saint Polycarp, bishop of Smyrna, and a disciple of Saint John the Beloved himself.  The contemporary and eyewitness, as well as endearing and all-too-real, account of his martyrdom in 155 A.D. provides a window into the early Church, and the persecution of Christians at the very dawn of Christianity.

When faced with apostasy or death, Polycarp, then in advanced years, replied:

Eighty and six years I have served Him, and He has done me no wrong…how then can I blaspheme my King and Savior? You threaten me with a fire that burns for a season, and after a little while is quenched; but you are ignorant of the fire of everlasting punishment that is prepared for the wicked

As was the custom, they were going to nail him to the pyre, for almost everyone will bolt when the flames begin to burn their flesh, but, again, Polycarp:

Leave me as I am. The one who gives me strength to endure the fire will also give me strength to stay quite still on the pyre, even without the precaution of your nails

And so it was. The saint remained still, as he prayed:

Lord, almighty God, Father of your beloved and blessed Son Jesus Christ, through whom we have come to the knowledge of yourself, God of angels, of powers, of all creation, of all the race of saints who live in your sight, I bless you for judging me worthy of this day, this hour, so that in the company of the martyrs I may share the cup of Christ, your anointed one, and so rise again to eternal life in soul and body, immortal through the power of the Holy Spirit. May I be received among the martyrs in your presence today as a rich and pleasing sacrifice. God of truth, stranger to falsehood, you have prepared this and revealed it to me and now you have fulfilled your promise.

It is said that there was no smell of burning as Polycarp offered his soul, but that his body seemed like baked bread, giving off the scent of costly incense.

May our lives be an offering to God like Polycarp’s, whatever way He may ask this of us.