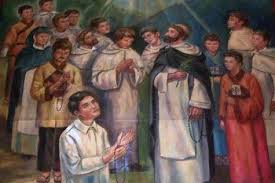 Today is the feast of Saint Lorenzo Ruiz (+1637), born of a Chinese father and a Filipino mother, raised well in the Catholic Faith which had been brought to the Phillippines by Dominican priests, at whose Masses he would serve. His beautiful handwriting landed him employment as an escribano, an ecclesiastical scribe and calligrapher (would we had such jobs nowadays). He married, settled down, and was raising three children when he was mysteriously accused – falsely it seems – of killing a Spaniard, so he sought asylum aboard a ship with some Dominican priests, which was on its way to Japan.

It was thus that Lorenzo ended up being a sort of unintended missionary, bringing the Faith to the island of the Rising Sun, which had yet to accept the Son. The Shogunate was persecuting Christians – this was about the era depicted in the Shusako Endo’s book (and film) Silence –  and the would-be missionaries were thrown into prison, then tortured on and off for the next two years, in an unrelenting attempt to force them to renounce their Faith.

But they all stood fast. Brought to Nagasaki, where many Catholics had witnessed for the Faith, the same city centuries later bombed by the Americans, they suffered in much the same manner as the semi-fictional protagonstis in Endo’s novel, but unlike the sad, ironic story of apostasy, Lorenzo and his friends quite literally hung on to the end. The tsurushi – being strung up upside down over a sewer pit, till blood loss and asphyxiation took you – was one of the most unpleasant of deaths. The Japanese would leave the victim one hand free, so he could signify with a simple gesture his renunciation. But Lorenzo refused to recant as his life blood ebbed away, a witness and example for us all, declaring before his death,

If I had a thousand lives, I would offer them all…

The beatification of Lorenzo and his companions by Pope Saint John Paul II in 1981 was the first such ceremony held outside the Vatican, a step in the universalization of the universal Church; we truly are Catholic, in all that word means.

We also celebrate on this day good King Wenceslaus, the hero of that rather catchy Christmas song, the one who looked around for any of his people in need in the crispy fresh snow on the feast of Stephen, murdered by his own brother in a fit of dynastic jealousy on this day in 935, in the era inappropriately known as the ‘Dark Ages’, but were in fact ages of great faith and learning. From what we know of Wenceslaus, he comes across as a noble and righteous ruler, one we could use far more of in our age of opportunism, cynicism and hypocrisy. Be bold, be true, and God will see us through whatever travails there be, right to the end.