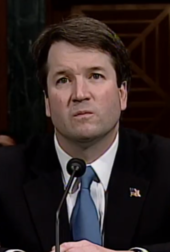 One knows not what to say at times, as events spiral faster than one’s capacity to comment on them; even one’s reflection is superseded: Oh, you may reach a tentative conclusion, then someone says or does something even more outrageous, and you think, hmm, I should revise that. In the midst of the chaos, we must keep our wits about us, our minds focused and loins girded.

The Kavanaugh inquisition – or what other word does one use – is reaching its finale, as the alleged victim, ‘Dr. Ford’, presents her testimony this morning.

Now that I think of it, calling this an inquisition is a slight upon the Inquisition, which at least believed in due process, innocence until proven guilty and all that. Yet witness one sitting Senator, Kirsten Gillibrand, publicly declaring that Mr. Kavanaugh does not deserve due process because he is not ‘on trial’, and anyway, the presumption, for sure he’s guilty.

Well, first, he is ‘on trial’ before a legislative body, the Senate, and accusations of past grave and criminal misconduct should be proven beyond reasonable doubt.

And, second, presumed innocence is not just a legal principle, but more fundamentally a moral one, that should apply to how we speak about and act towards others in charity and justice even in the most mundane of daily interactions. Judge not, lest ye be judged.

Yet it seems the ‘Democrats’ – a term encompassing those who would like to jettison most of what makes civilization civil, just and humane – seem rather fatigued of ‘charity and justice’, except in their inverted notions. Abortion is just, indeed a human right, ignoring, of course, the baby, who is not really a baby, but might be, if the mother deems it so. Sodomy is a basis for love and marriage, and one’s sex is as changeable as one’s clothes. Legal principles can be ignored, and people’s reputations deliberately and irrevocably besmirched, if any of these aforementioned ‘rights’ is threatened. Total war, manners and the moral law be damned. Oh, and the universe is whatever you make it to be.

I know not what Brett Kavanaugh did in high school, and I don’t think anyone really can know, three-and-a-half decades in the past. Things keep getting murkier. Now, Spartacus style, two other men have come forward claiming to be the ‘assailants’ in the alleged assault, including of the other alleged victim, all the while other victims of whomever lurk in the anonymous shadows.

What happens to Mr. Kavanaugh –decided by vote tomorrow – is secondary to what has already happened to him. For he will always be ‘tainted’ to some extent, as was Justice Clarence Thomas all those years ago in his own inquisitorial process (which he survived).

The simple reason why so much depends on this show trial, why it is such a media circus, and why the Democrats are so apoplectic over the semi-warm conservatism of Justice Kavanaugh is that the Supreme Court has far too much authority, and the Democrats recognize the potential threat to their imposed amoral ‘view of the universe’, a threat that must be deposed of, forthwith, by means fair or, more usually, foul.

As I ponder this whole mess, I would also suggest that now is a good time to do away – I almost wrote due away – with the hubristic, anointed, be-robed, unelected, no-recourse-allowed authority of the Nine Justices who can do no wrong, and now have more power and influence than any elected body in the Republic, an inversion of the Constitution if ‘ere there were. In fact, the Supreme Court has more sway over the minds and souls of the people than the very Magisterium of the Church, which, under certain conditions, does happen to be infallible (see Griswold and Roe for the Court’s influence in changing minds on contraception and abortion, regardless of what the Church has always taught).

If this bizarre episode wakes people up to that, I suppose some good will have been done.

There are bigger issues here than Justice Kavanaugh’s fate, and all this should remind us that underlying the moral edifice is necessary for law not just to be just, but to work at all. Unhinged from the very laws of God that ‘will never pass away’, human law becomes a travesty, and we may be witnessing the beginning of the outright collapse of the rule of law, as warned by Pope John Paul II in Evangelium Vitae. Grave and consistent immorality, to put things mildly, eventually takes its toll.

We could call this whole circus a joke if it were not so serious. To paraphrase Thomas More’s response to his son-in-law Roper – who wanted to tear down the laws to get at the king – without the ‘thicket of laws’, what wicked winds will blow then, and what protection will we have from the capricious forces of evil? A brief perusal of Soviet Russia gives a glimpse of a land without ‘due process’

Even then, be bold, and fear not: For we of sort-of sound mind can always rebuild from the rubble.