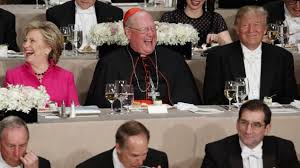 I have an article posted this morning on Crisis magazine, on How Catholic is Kaine, Hillary Clinton’s Vice-Presidential running mate.  Feel free to peruse.

I should have added the irony that Donald Trump’s running mate, Mike Pence, a former Catholic, and now apparently a Protestant, describes himself publicly as ‘100% pro-life’.  The scandalous irony is that the lapsed Catholic Pence is more Catholic than the proclaimed ‘devout Catholic’ Kaine.  The Protestants are living out our Catholicism better than we Catholics.  Such is our ecumenical age, I suppose.

Whatever his faults and failings, at least Donald Trump professes a commitment to life issues, something Clinton would never do. She is ‘100 % pro-choice’, in the modern idiom, or idiocy, as one may choose. Last night, the two candidates traded barbs at the annual Alfred E. Smith Memorial dinner, a tradition where those vying for the presidency take a break and meet each other for the last time before the election, in a friendly ‘Catholic’ atmosphere (the original Al Smith was the first Catholic presidential candidate in 1928, with John F. Kennedy being the first Catholic president in 1961).  Anyway, at said dinner, which was supposed to be a good-natured event, Trump was booed and jeered for his edgy jokes against Clinton, seemingly going beyond the vague line of ‘good nature’.  And there was Cardinal Timothy Dolan, the host, seated uncomfortably between Trump and Clinton, smiling wanly and, one might think, forcedly.

For how can you smile and joke with someone like Clinton, sitting there with her rictus grin and eyes a-fixed, licking her chops until she and her husband take their place once again as the rightful heirs of the presidency? Mark Steyn  was onto something when he found it curious that the presidency in America is evolving into an hereditary monarchy, the unjust usurpations of which were the very thing the youthful United States rebelled against in 1776?

But now, the new presidency-monarchy is not even constrained even by a faint vestige of noblesse oblige.  At least the kings and queens of the ancien regime had to make some appearance to be on the people’s side, and were constrained by constitutions, laws and the ever-present threat of revolt. But one glance at the Clinton foundation and its corruption will give one the feeling that the Clintons seems smug and secure, and there is only one side the Clintons are on, and it does seem to be the side of the angels.