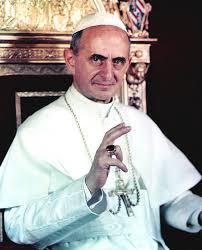 I am hurtling in a high speed train from Glasgow to London, with a heavy heart saying farewell to my native land, a sentiment that should live within us all. It is the memorial of Saint Charbel Maklouf, a Lebanese priest, ascetic and mystic, as well as the vigil of Saint James the Greater, whose feast also coincides with the promulgation of Blessed Paul VI’s encyclical Humanae Vitae in the fateful year of 1968. To say the document was prophetic should be understood in the strict sense of that charism: For a prophet ‘sees’ the future, but in light of the present. Like the train in which I write, there is an inevitability to certain of our choices, for the rails take us where we would rather, or at times rather not, go.

Paul VI saw a half century ago that if the world chose contraception, and if the Church permitted such, if we were to attempt to dissociate the procreative from the unitive ends of the sexual act, the results would be disastrous, and we would end up more or less where we are now, a place far worse than anything one might find in the less savoury boroughs of London, and more akin to one of the lower circles of Dante’s Inferno. Here are the words of the Pope:

Responsible men can become more deeply convinced of the truth of the doctrine laid down by the Church on this issue if they reflect on the consequences of methods and plans for artificial birth control. Let them first consider how easily this course of action could open wide the way for marital infidelity and a general lowering of moral standards. Not much experience is needed to be fully aware of human weakness and to understand that human beings—and especially the young, who are so exposed to temptation—need incentives to keep the moral law, and it is an evil thing to make it easy for them to break that law. Another effect that gives cause for alarm is that a man who grows accustomed to the use of contraceptive methods may forget the reverence due to a woman, and, disregarding her physical and emotional equilibrium, reduce her to being a mere instrument for the satisfaction of his own desires, no longer considering her as his partner whom he should surround with care and affection. (H.V., #17)

One could expand upon this simple, laconic paragraph, using more vivid language, but a look around the world would suffice that things have become even worse than the Pope foresaw, whether in our own families, neighbours, friends, relations: All have been touched by the corruptive hand of the contraceptive mentality, its deleterious effects seen especially upon the fairer sex, in which the transaction of sex is now anything but fair.

The roots of this tragedy are philosophical and theological, and one must admit, somewhat subtle.

Reflect upon the travails of the Birth Control Commission, set up by (now Saint) John XXIII in 1963. Contrary to the modern myth, its task was not to determine whether the Church should permit contraception, but, rather, whether the newly-invented ‘Pill’ acted in a contraceptive way. For contraceptive sex has always been condemned by the Church, and is an irreformable and infallible teaching.

What the ‘Pill’s’ primary developer argued, the avuncular and saintly- looking Dr. John Rock, a Catholic, whose grandfatherly image was everyone’s idea of an elderly, wise physician, was that the Pill simply extended the woman’s infertile period, during which sexual intimacy has always been permitted within the context of the so-called ‘rhythm method’, made clear by the addresses of Pius XII a decade before. (Sadly, according to reports, Dr. Rock would give up the practice of his faith with the promulgation of the Pope’s encyclical).

As with all too many bureaucratic entities, the Birth Control Commission, which eventually grew to 73 members under Pope Paul VI, went beyond its mandate. As the Pontiff pondered, some say too long (still, he was clear that Catholics were not permitted to use the Pill, even though many listened not), a majority of the Commission (all but four) came to its own conclusion by 1967, in the so-called ‘majority report’, which was leaked to the press. As many hoped, and expected, they recommended to the Pope that the Church soften its stance againts contraception. Most did listen with itching ears to this seductive voice.

Their arguments all boiled down to the principle of double-effect, that contraception could be tolerated for the sake of a greater good, or to avoid a greater evil, so long as the couple were in general, in the whole span of their ‘marital acts’, ‘open to life’.

But the Pope saw more clearly, and went his own, or rather God’s, way. Humanae Vitae hit like a bombshell a year later, teaching clearly that any deliberate, which is to say voluntary, tampering with the procreative (or the unitive) aspect of human sexuality is an intrinsic evil, and can never be done. In fact, as he put it succinctly, ‘each and every marital act must remain open (per se destinatus) to the procreation of human life’. That is, it must be the kind of act that could produce a child, even if the act remain infertile beyond the control of the couple.

Each and every? To the crass, narrow and materialistic eyes of the world, this seems rigorist, harsh, even inhuman. And so the world walked away, rejecting Humanae Vitae carte blanche, a decision with whose bitter fruits we have lived ever since. From contraception permitted only within marriage, rarely and for grave reasons, the infernal gates have opened so that the Pill is now regularly prescribed to tweens, giving their bodies to the first boy willing to go the distance, which means, take your pick. Such girls become all too bitter and wizened in their early twenties. And when contraception fails, we have abortion, safe, efficient, and, well, it used to be sort of rare, now all-too-convenient. And if sex means whatever we want, why not homosexuality, polygamy, polyamory, transgenderism, even, dare I say it, paedophilia and pederasty, the last two still taboo, so far?

Sex, and even our sexuality, is now but a ‘thing’ amongst others, with whatever signification we choose to bestow upon it.

The problem is that the moral law doesn’t work that way, and the power and authority God gave to Man does not extend to determining what is fundamentally good or evil, a judgement whose basis, as Pope John Paul II reminded us, is objective, written by that same God into the very law of our nature, which we corrupt to our peril.

So we are on a path, a veritable railway, to mayhem and misery, breakdown and chaos, unless we repent, undergo that metanoia of which Christ speaks, change our minds and start living in the truth.

Prophetic indeed. Paul VI’s teaching was, and still is, only welcomed by a few, a veritable faithful minority. On the whole, the Pope suffered scorn and rejection, even from the highest members of the Church, along with innumerable laypeople. He never wrote another encyclical after that July of 1968, but perhaps he did not need to. At least in that realm, he had done his work, given his witness, and is now soon to be raised to official sainthood. Perhaps Humanae Vitae was his miracle. At least we should treasure it so. Ora pro nobis.

All in all, Humanae Vitae has aged quite well. It is the world that has grown old in its wickedness.