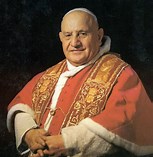 Today marks the 59th anniversary of the opening of the Second Vatican Council, back in those heady days of the early sixties, the future, to many eyes, full of promise and hope, throwing off the shackles of their own ancien regime, the bourgeois suburbia of the post-war era giving way to the hoary hedonism of the hippies.

This is also the day chosen by the Church to commemorate the Pontiff who called the Council, John XXIII, an elderly ‘caretaker’ Pope, when elected as a portly septuagenarian upon the death of the austere Pius XII in 1958. No one expected him to call an ecumenical Council, which are rather rare, the last being interrupted by the Franco-Prussian war in 1870, and the one before that was the Council of Trent (1545 – 1563). As Pope John later said, the idea for the Council came to him as a sudden inspiration – when he announced his intention to the cardinals assembled at Saint Paul’s basilica, he was met at first with stunned silence.

We may all have our opinions of the Second Vatican Council (1962 – 65), but we should keep in mind that much of the post-conciliar mayhem had little to do with the conciliar texts, which are overall quite conservative, especially if read in their original and official Latin (the English translations often leave something to be desired). Even if a bit vague in parts, the Council prescribes continuing the Tradition: Latin in the Mass, Gregorian chant (to be given ‘pride of place’), the organ, Saint Thomas Aquinas, the value of priestly celibacy and chastity, the power of contemplative life (‘as effective as it is hidden’), the historical truth of Scripture, especially the Gospels, the divinity of Christ and devotion to His mother and all the saints, and the necessity of the one, true Church for salvation.

Pope John himself was traditional and conservative – one of his last teachings was the Apostolic Constitution Veterum Sapienta, on the need to maintain Latin in the Church, even firing professors who were not proficient enough to teach in the official language of the Church (!).

Born Angelo Roncalli, he was steeped in the piety of his peasant upbringing, always hopeful and jovial, fourth in a family of thirteen, disciplining himself to see the good in all and everyone, striving for personal sanctity. Ordained on August 10th, 1904, he moved up through the ranks of the Church without ambition. As nuncio to Turkey, he worked tirelessly for the Jews during the Second World War, even giving them, according to some reports, fake baptismal certificates to help them escape. Padre Giovanni strove to see the good in all men, and that salvation not only as open to all, if only each soul would accept the fullness of truth as they were given the grace to perceive it, or Him. The journal that he left us is filled with applicable piety, signifying a soul serious about holiness, but also filled with humous, as all saints should so be. As he once quipped:

It often happens that I wake up at night and begin to think about a serious problem and decide I must tell the Pope about it. Then I wake up completely and remember that I am the Pope.

His desire as Pope to open the ‘windows of the Church’ to the world, was so that we as Catholics ‘might see out, and others see in’. He perhaps did not see – and did not live to see, dying of stomach cancer on June 3, 1963, less than a year into the Council – that the world, even the ‘smoke of Satan’, might enter enter the Church through one of those windows opened a little too wide.

In his first Christmas address in 2005, Benedict XVI warned against what he termed the ‘hermeneutic of rupture’, interpreting the Council to mean a break from the Church’s Tradition, her morals and liturgy; rather, we must follow a ‘hermeneutic of continuity’, reading the Council, as it should be read, as embedded in and flowing from the preceding two millennia of Church teaching and practice.

But various and nefarious ‘spirits of Vatican II’ now lumber or prowl about the world, depending on their degree of maliciousness, seeking what and whom they may devour. Many no longer even care about what the documents actually taught, and few, I fear, have even read them.

So we journey towards our final end, choosing what sides we might, the wheat and the tares, inextricably linked, now being divided – or, rather dividing themselves – by an ever-wider chasm. We must choose what side we are on – rupture or continuity – and persevere thereon.

He who is not with me, is against me. And the Church and Christ are one.

Good Pope John knew and lived that. And so should we.