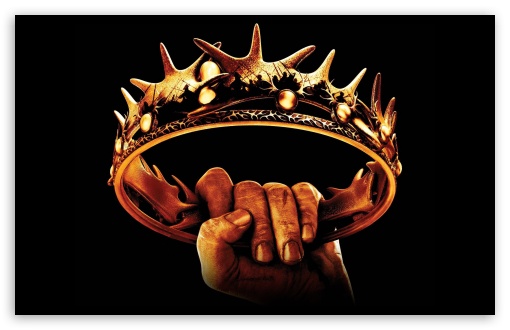 I have this theory, and history attestst to its veracity, that people are by nature monarchists.  Oh, we may give lip service to republicanism or good old constitutional democracy, but we ultimately want someone to take care of us and our problems. Like the Israelites of old, we clamour for a king.

Also like them, we ignore the warning of the prophet Samuel, that this desire for a king is a disordered one, seeking someone who will fight our wars, provide for us, coddle us, all of which signifies a lack of trust in God and His providence, as well as a refusal to rely on our own capacity, the obligation to solve our own problems, and to stand on our own two feet.  It is sort of an incipient form of nanny-state socialism.

So the Israelites went for Saul, the most handsome of them all, standing head and shoulders above the rest; but like any number of big, bluff men too reliant upon their own apparent strength, he was at heart a coward, and in the face of Goliath, who stood a bit more than head and shoulders above even Saul, the soon-to-be-former-king hesitated, and lost out in the affections of the people to the ruddy, somewhat runty, but courageous and charismatic David, slayer of the giant.

But I digress.  Ah, yes, we want a king, and a king must have some kind of right to rule. The initial kings were chosen based on some sort of ability (as in Saul’s height), or natural gifts and charisma (as in David’s fighting prowess), but soon was adopted a hereditary right to rule, based on lineage, blue blood, a patronymic which signifies, like Hamlet, he is to the manner born.

Hence, the election of Justin Trudeau, by and large because, like most of us, he has the last name of his father.  Unlike most of us, his father was famous, or infamous, as you may have it.  If Pierre could govern, why not the son?

This is not a new thing, of course, for history is replete with the Capets, the Plantagenets, the Tudors, the Romanoffs, or even further back to the Ptolemys and Ramses of Egypt.

Even in republican America where ‘anyone’ can be president, one need only ponder the Kennedys; yes, they managed to put but one of their Irish clan on the throne of the White House, but very nearly to two or three more.  Yet Washington and various other political offices throughout the nation seem to be crawling with their descendants.

The same goes for George Bush and his son George W., and, almost, the brother, Jeb, a veritable dynasty. And what is one to make of the Clintons, husband and wife?  We won a close one there. But already the rumour mills are churning of Chelsea’s future run for the top job; and who is to say that the Obama daughters may not soon make a pitch?

All this in the very heart of the republic, which threw off the yoke of George III in part because the King had never been elected, and who was he to tax without representation?  Yet what sort of ‘representation’ is there if a nation, even by default, adopts the same hereditary principle as England once did?

We now see a similar, if more subdued, effusion for Caroline Mulroney, daughter of erstwhile Prime Minister Brian. She has never held office, and has apparently already flip-flopped on the rapacious carbon tax (first for, now against). But she’s a Mulroney, therefore must be competent to rule.

Who now knows when a Chretien or Martin will show up, or perhaps a great nephew of Laurier or Diefenbaker.

I personally don’t think this has much to do with blue blood or the divine right of kings, prime ministers or presidents, but rather to the fact that we just love familiarity, much the same reason we like to see the same stars in films, a tradition that goes all the way back to Shakespeare, and even the ancient Greek dramas:  We want the same face, whose talents we trust. There is change, but also stability, and we feel good and comfortable.

There is nothing  too much wrong with that, for all authority comes from God, and He can dole it out as He sees fit, based on charisma, birth or just pure chance, as a reward or as a punishment.

What is essential is that we heed the warning of Samuel: We must trust in God first, realizing that His law is tantamount, inviolable, and woe to those who disdain this authority, as Jeremiah warns, who lean too much upon the fleshy and capricious arm of Man.

At the end of the day, who governs is really a secondary question, especially in our day and age, where the whole bloated governmental behemoth will run happily along run, caring not much of a fig who is nominally ‘in charge’.  How is any one person in Ottawa or Queen’s Park going to clean out the Herculean stables of the ‘deep State’, from the life-long, hidden and impossible-to-fire bureaucrats and various apparatchiks, all the way down through the chain of command, to the police officers, teachers, lawyers, government workers, unionized employees in untold number of State-run-and-or-subsidized businesses, all indentured and impossible to fire, remove or, as the case may be, reprimand. Even the Ontario Conservative Party itself has been compromised under the reign of the erstwhile and not-soon-to-be-missed Patrick Brown (but more on the injustice of his travails soon).

This is not to say that a good candidate cannot be a good leader who can in turn do some good, or at least minimize what evil there is and must be, and I would support a true conservative.

What I am gently suggesting is that we obsess a lot less about our politicians, and stop treating them as oracles, filling our media with their speeches, comments and policies, which signify that they are actually quite ordinary, often mediocre, and sometimes,  sadly, even downright ignorant and venal men and women, too feted for their own good. The effervescent and often puerile goings-on in Ottawa or Washington will all pass away like a bad nineties hairstyle.

As things now stand, to paraphrase Saint Augustine, we get the leaders we deserve, so best to pray, reflect and reform oneself, stand firm in the truth, live by it, and everything else will eventually follow.

As John Paul II  consistently taught, the direction and the morality of a society are determined not so much from the top down, but rather from the bottom up, from its culture, all those things that the people, you and I, all the hoi polloi, truly hold near and dear, our religion, our faith, our moral principles, our family life, and our view of eternity, how we as individual persons live out what we truly believe.

How consistent is our prayer life? Do we focus upon God? Are we complicit in the evil of the culture? How do we educate our children or, more to the point in our socialist milieu, allow them to be educated by various state employees? Do we immerse ourselves in a liturgical life, seeing things from the perspective of eternity, or are we more concerned with how many baubles, honours and awards we can get this side of the grave?

One truly well-offered Mass could do miracles, to paraphrase the Curé D’Ars, and the hidden sacrifices of one saint can change the world.  On that note, the Devil once confessed that if there were but three priests like Father Vianney, his kingdom would be destroyed tomorrow. The same could be said of any soul who truly does the will of God.

A bit more focus on that would do us and our society a whole lot of good.

What is Caesar’s, When All is God’s?