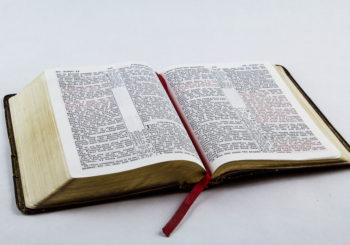 The slogan of the Protestant Reformation was “sola Scriptura,” that is, a conviction that the Bible and the Bible alone contains God’s revelation to his people. The invention of printing made it possible to distribute copies of the Bible widely, assuring easy access to the sacred text in the vernacular. The assumption was that the Bible could be understood by the individual believer in its plainest, most obvious sense. For what would be the point of God’s revealing himself in a document that was inaccessible? Thus, since God would not lie, the world must have been created in seven days, beginning on 22 October 4004 B.C.,[1]  Noah’s flood would have been world wide, putting Mount Everest under fifteen cubits of water, and so on, with every personage and event taken at face value. In an age of universal ignorance of modern science, such notions did no harm, as they were simply background for the spiritual comfort and nourishment the Christian derived from Scripture. In fact, the Bible could be described as scientific for the time in which it had been written; it is, after all, a rational conclusion, based on observation, e.g., that the sun rises in the east and sets in the west. Again, there were disastrous floods in the region of Mesopotamia that inundated the entire world as then known, and the biblical authors simply took it for granted, as a fact. But the point of the biblical narrative, here as elsewhere, was a moral one: the flood was a punishment for sin, and the magnitude of the catastrophe indicated the extent of the evil it righted.

Two developments challenged the naïve world view of the early Protestants. The first, ironically, arose from a desire to provide the best possible version by the use of linguistic skills and historical research; if God’s revelation is limited to the Bible the reader must have an accurate text. Study of the ancient languages, beginning with Greek and Hebrew, proceeded apace, and archaeologists began exploring the biblical sites. This scientific approach called into question many of the assumptions of the Reformers. For one thing, a definitive text was not easily produced. There are four different endings to Saint Mark’s Gospel, for instance, with little indication of which one is to be preferred. Similarly, the passage about the woman taken in adultery—John 7:53-8:12—has certainly been inserted into the fourth Gospel (perhaps from a different place in the Gospel, Ed.) [2] Archaeology, too, presented difficulties in that many of the events recorded in the Old Testament could not be verified. Developments in astronomy and Darwin’s theory of evolution put an end for many to the literal reading of the Bible or even to its inspired character.

While this form of fundamentalism has waned, another has arisen in its place. If we accept as characteristic of fundamentalism a conviction that the meaning of the Bible is limited to the wording of the original text, then modern scholars fit the definition, for the goal of their approach—the historical-critical method—is to study the languages, the geography and the socio-economic setting of the society in which the biblical books appeared. One might say that the naïve fundamentalist looks upon the Bible as a blueprint with which he can reconstruct today what God established in ancient Israel and apostolic Christianity. The scholar, similarly, views it as an antique collection of documents, but one which only the most learned scholar can hope to decipher. Some have even declared that no one can comprehend it, for the cultural gap between the ancient world and ours is too great to be bridged. The difficulty has been illustrated by a familiar visual paradox. Does the illustration portray two facing profiles (the white) or an elaborate vase (the black)? Interpreting the Bible is comparable to our insisting that the image is of two profiles when the ancients were drawing a vase.[3]

It is disheartening to note that, almost invariably, Catholic scholars and preachers in their writings and sermons have come to rely more and more on the historical-critical method with its concentration on the literal sense of the biblical text. It should not be so. To begin with, we have two—not one— inspired versions of the Old Testament: the Hebrew and its ancient (dating from ca. 250 B.C.) Greek translation, known as the Septuagint. Furthermore, we do not accept the principle sola Scriptura, for we recognize Tradition as a parallel source of revelation. That fact frees us from the limitations and frustrations of an exclusive focus on the “original” text, whatever that might be. Once, in a public debate with a Protestant minister, I was called upon to defend Tradition, and I came up with a formula that should have ended the discussion (although, of course, it didn’t): “Tradition is the Bible as it has been lived in the Church.” Our image of Scripture is not that of a blueprint or a conundrum, but of a seed that has been planted in fertile soil, producing branches, leaves, flowers and fruit across the centuries. Hence the Bible’s message includes not only the literal sense that has obsessed in different ways the credulous and the scholarly fundamentalist, but also the sublime poetry of the liturgy, the imaginative allegories of an Origen or an Augustine, the mystical insights of a Teresa of Avila, the homely sermons of a John Vianney and the systematic explorations of a Thomas Aquinas. What did Our Lord want of us when he said, “Sell what you have, give to the poor and, come, follow me”? Saint Francis of Assisi is a guide to its meaning. The Catholic conviction is that anything in the Bible will have its counterpart in the Church, just as anything essential to Catholicism will have one in Scripture. The prominence of Saint Peter in the New Testament, for instance, leads us to look for a magisterial figure in Christian history, which we find in the papacy. But we could equally have begun with the papacy, confident that a parallel would exist in the New Testament, as it does.

I can understand why Protestants avoid the Catholic approach to the “fuller sense,” for with a bit of imagination one can prove anything he wants from Scripture. Saint John Henry Newman reports that an Oxford don in the nineteenth century saw in the Universities of Oxford and Cambridge the two beasts of the Apocalypse. But a Catholic is preserved from such absurdities, for he works within the boundaries of Tradition and the magisterium. It follows that we look to the pope and the bishops to be active in censoring any departure from tried-and-true Catholic teaching on the part of adventurous theologians, trendy priests or gullible lay men and women.

[1] The calculation was published by the Anglican Bishop James Ussher in 1650. There are numerous websites devoted to his exegetical works.

[2] A brilliant description of the difficulty of establishing a text of the New Testament can be found in M.M. Parvis, “The Goals of New Testament Textual Studies,” Studia Evangelica VI (Berlin, Akademie-Verlag, 1973), pp. 393-407.