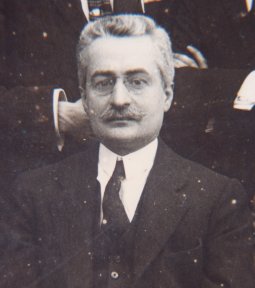 April 12th marked the anniversary of the death of Saint Joseph Moscati, an Italian physician, who dedicated his life to helping the sick and the poor, often giving them money along with their prescriptions, taking a vow of chastity so he could focus on this apostolate, helping countless patients, and was one of the first to experiment with newly-discovered insulin in the treatment of diabetes.

On this morning in 1920, he received Communion at Mass, went to see patients, sat down to rest in his office armchair, and never arose, entering peacefully into eternity.  He was canonized by Pope Saint John Paul II six decades later, on October 25, 1987.

Saint Moscati symbolizes the best way to do medicine, motivated by the good of the patient, often working gratis for the poor, not seeking a comfortable living, a fat bank account, prestige and honour.

Rather, for Dr. Moscati, his days spent in the hospital or office, day in and day out, energized by a solid prayer life and sacramental participation, especially the Holy Eucharist. A simple quiet hidden life, but known quite well, one would think, to God and his patients.

Dr. Moscati’s example could teach the world a thing or two, not least the ‘vocational’ aspect of medicine, in proximate danger of getting lost in our efficient world, valuing whatever ‘careers’ (how I despise that term, more fitting for a missile than a person) are most lucrative.

Yesterday, on the CBC, there was a report that a growing number of graduates from medical school cannot find residencies, which means they cannot become licensed physicians, and have to go back to school for a year, and try again, already in debt as much as a mortgage. There was talk of decreasing the number of medical students, or, yet again, increasing the already-mind-boggling funding in health-care, currently draining most of the wealth of our struggling economy.

One commentator gasped at the former option, decrying Canada’s current desperate lack of doctors’, but she cries wolf, for such is by and large an illusion: People seem unable to grasp the fundamental principle that if something is ‘free’, and much-desired, it will be abused. Physician’s waiting rooms are filled with people who are spiritually broken, the lonely, elderly, anxious, depressed, broken-hearted, fearful, those suffering the effects of an unrepented life of sin, which has both physical and spiritual consequences, either in our own lives or those around us, and whose ailments and sufferings can scarcely be healed by modern medicine, a point Pope John Paul II makes in his 1984 Letter on Suffering, Salvifici Doloris, wherein he discusses pain of

Indeed. Yet how many strive to ‘reach’ and heal such spiritual suffering by therapy, to mask it with a panoply of psychotropic drugs, or long sessions with very expensive psychiatrists, or, most often, both?

Then we have all the minor ailments that require not the specialized training of physicians, the colds, flus, headaches, cuts and bruises, all of which used to be cared for in the home; but who has a ‘home’ anymore, and how many live lives of quiet desperation, all alone, the elderly and shut-in, the abandoned and cast-off, for whom a trip to the doctor is their one excursion, and who will go as often as they are able, even if just to fill the never-ending prescriptions at who knows what cost?

We are quite literally drowning in debt in our province (see Paula Adamick’s take on the debacle caused by a decade-and-a-half of Liberal governance), while the medical system stumbles along in its own life of ‘quiet desperation’, as any trip to a doctor’s waiting room, (if you can get on the list) or, worse yet, to any urban emergency centre, if you must, and dare.

As I have written before, the average salary of a physician in Ontario is close to $400,000 per annum. Most of the graduates in the near future will be female; I have nothing against doctors of the fairer sex, and think women should have the option of a female care-provider, as the saying goes, and males, a male one.

But how many of such female doctors will enter the married state, with all that entails, and how many will end up consistently working in any sense considered ‘full-time’, to say nothing of any current doctor, male or female, imitating the life-long dedication of Blessed Moscati? (Keeping mind that the number of physicians, as well as how they are remunerated, and each of whom takes years and great expense to educate and train, is strictly controlled and regulated in our socialist system).

At the very least, what possible incentive would there be to do so, except either financial, or, dare I even suggest it, spiritual? The ‘average’ doctor, of whatever sex, could work one-quarter time, and still take home more income than the average Canadian, who is funding all of this (if one considers piling up yet-more debt, ‘funding’).

I do wonder about the spiritual motivation of our physicians, at least in any Christian sense of that term, as med-school applicants are carefully screened, probed and prodded for any even vestigial ‘pro-life’ or dogmatically ‘religious’ views, to say nothing of even subtle anti-transgendered or homophobic tendencies. In fact, it is already the law that if doctors refuse to formally cooperate in the legally-sanctioned murder-suicide known as ‘euthanasia’, they can be charged and lose their license. And woe to those who try to ‘cure’ a homosexual, or properly counsel a troubled teen questioning his ‘gender’.

As the traditional old guard fade away, physicians who actually believed and lived the first principle to ‘do no harm’, like my dear Dad who retired a few years ago, they will be replaced by the functionaries of a State-mandated education, drones of our socialist system, highly-paid and technically proficient, perhaps, but spiritually bereft, even, I would posit, evil. They may yet speak the language of compassion and cultivate a proper bedside manner, but what grim and determined atheism and amorality lies behind the soft and gentle greeting?

Oh, for a few more medical Moscatis! And if, like him, patients were only aware of how much spiritual, psychological and even physical good can come from regular and honest confession and reception of the Eucharist, the ‘medicine of immortality’, I dare say waiting rooms would have far more room, and churches far less, much to the good of all.

As Dr. Moscati and Pope John Paul II were well aware, we are persons made in God’s image, and the proper care of us as ‘human’ requires solicitude for our souls as well as our bodies, but that what we can best give to others is our very self, without stint or compromise; and not primarily for financial gain, but for the kingdom of heaven, the only reward worth striving for.