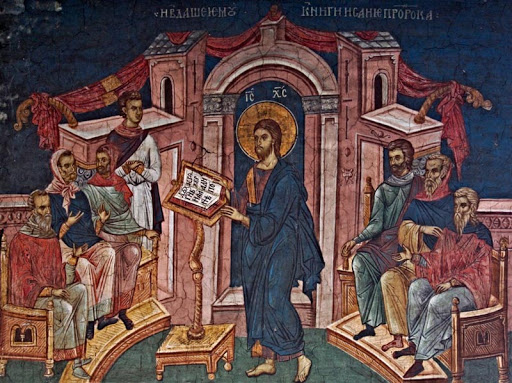 And Jesus could do no deed of power there, except that he laid his hands on a few sick people and cured them. And Jesus was amazed at their unbelief (Mk. 6:6).

The Scripture lessons of today’s Mass speak of the difficulties encountered in the work of the Gospel, the work of salvation. The Prophet Ezekiel was sent out to the rebellious house of Israel, to a nation of rebels, as they are described. St Paul speaks in our second reading of his ministry as an Apostle. The Second Epistle to the Corinthians, from which our second reading is taken, is a personal response to a serious crisis that threatened his ministry. There were those who questioned whether he was in fact an Apostle because he had initially been a persecutor of the earliest Christians. This doubt is not unlike the opposition encountered by Our Lord by those who took offence at him:‘Where did this man get all this? What is this wisdom that has been given to him?’ (Mk. 6:4).

St. Paul responds to his critics and in so doing he recounts a great deal about his travels, his sufferings, his disappointments, the persecutions he endured, the mystical experiences and visions he had and also of the consolations he received. ‘My grace is sufficient for you, for power is made perfect in weakness’ (2 Cor. 12: 9). In his First Letter to the Corinthians St. Paul had already affirmed that indeed God chose what is foolish in the eyes of the world to shame the wise [and that] God chose what is weak in the world to shame the strong (1Cor. 1:27). The Prophet Ezekiel is instructed to say, ‘Thus says the Lord God.’ Whether they hear or refuse to hear, they shall know that there has been a Prophet among them (Ez. 2:5). God reassures the Prophet to speak in God’s name with confidence and with authority.

So we ask ourselves as we listen to the Word of God; how do we respond? What is our attitude to the saving word of the Gospel and to the Gospel’s ministers? Do we receive it with loving hearts or with unbelieving hearts? Some would argue that the question of faith and unbelief is a modern phenomenon but, unbelief even in the very presence of God Himself is not altogether a novel thing, as the Gospel clearly illustrates: And Jesus could do no deed of power there, except that he laid his hands on a few sick people and cured them. And Jesus was amazed at their unbelief (Mk. 6:6). Ours is a rebellious age and the silent apostasy that we have experienced and continue to experience bears witness to a general loss of faith. The solution to this collapse of the faith is not found in conforming the Church to the world; and it is certainly not found in watering down the Gospel so as to make it more palatable to unbelieving hearts and minds. This temptation is also not new. St. Paul encouraged the earliest Christians in Rome to be faithful to what the Gospel expects of us and his words are no less relevant to us today:  I appeal to you therefore, brethren, by the mercies of God, to present your bodies as a living sacrifice, holy and acceptable to God, which is your spiritual worship. Do not be conformed to this world but be transformed by the renewal of your mind, that you may prove what is the will of God, what is good and acceptable and perfect (Rom. 12:1-2).

By virtue of our discipleship, all of us participate in the work of the Gospel. Though Our Lord spoke these words specifically to His Apostles, and by extension to all who would preach the good news through the ages, in a certain sense they are addressed to all of us: ‘Behold, I send you out as sheep in the midst of wolves…you will be hated by all for my name’s sake (Mt. 10:16-22). This is why we must never neglect to pray for the grace of perseverance and for the gift of fortitude in the face of opposition, error and blatantly outright efforts to change the Church’s Deposit of Faith. These are the specific challenges that we face in our time. Externally, increasingly we face opposition from a culture of outrage characterised among other things by historical illiteracy. Dark forces have capitalized on this and as a result, we have witnessed the destruction of churches in our country and other acts of vandalism directed against Christian churches.

Church history clearly teaches that the Gospel is initially usually met with opposition and even hostility but that is because the Gospel always challenges us to conversion of life, to greater integrity and ultimately to holiness of life. It is good for us to be mindful of this, but it is essential for those whose task it is to preach the Gospel by virtue of the Sacrament of Holy Orders: bishops, priests and deacons. St. Paul exhorted one of the Church’s first bishops, St. Timothy to preach the word; be urgent in season and out of season, convince, rebuke, and exhort, be unfailing in patience and in teaching. For the time is coming when people will  not endure sound teaching, but having itching ears they will accumulate for themselves teachers to suit their own likings, and will turn away from listening to the truth and wander into myths (2 Tim. 4:2-4). In a godless world the priest has become an enemy; and sadly, there are times when this hostility is encountered even in the parish. Our Lord however explains why this is: ‘A prophet is not without honour, except in his hometown, and among his own kin, and in his own house’ (Mk. 6:4). The holy Curé of Ars, St. John Vianney, Patron Saint of priests observed that the priest is a crucified man….If a pastor stays silent on seeing God outraged and souls on the run, woe to him! If he does not want to damn himself…he must say no to human respect and the fear of being ridiculed and hated by his parishioners. And should he be put to death after descending from the pulpit; that should not stop him from preaching the truth.

Let us be grateful for the Gospel, the word of truth and of salvation and let us pray for our Bishops, whose task it is to guard the integrity of the faith. As for us, disciples of Christ, may it never be that Our Lord should be amazed at our unbelief. Rather, may we be found faithful, awaiting our blessed hope, the appearing of the glory of our great God and Saviour Jesus Christ (Tit. 2:13).