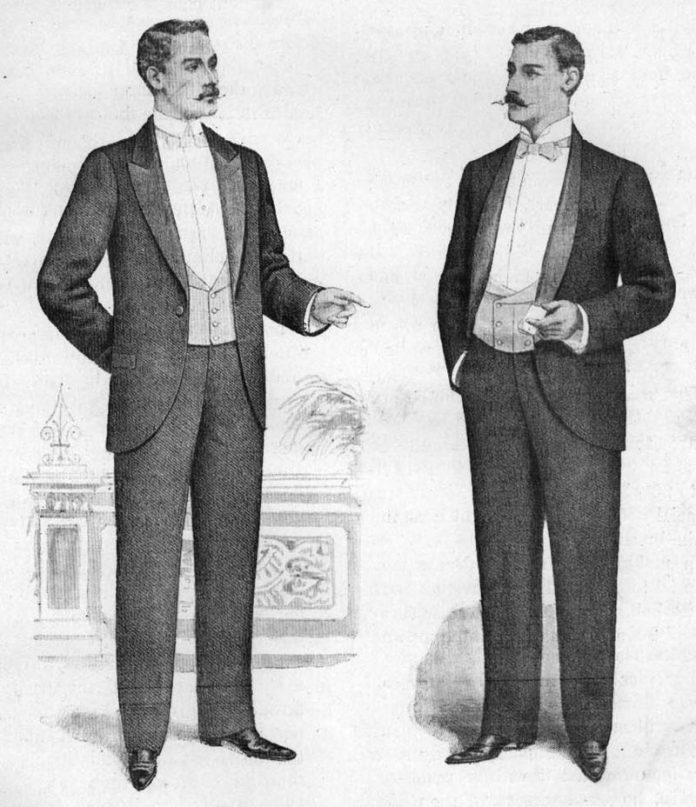 There are not a great number of occasions to which I get to wear a tuxedo, but when I was asked by a friend to accompany her to the opera I thought it would be a necessity. My tuxedo cost a grand total of twenty-five dollars at a second hand store, was in pristine condition when I found it, and could not have been tailored to be a more perfect fit. And although I only get to wear it one or two times a year it has become one of the most important parts of my wardrobe because of my trip to the opera. At the time of this episode, I was a fourth year university student and my school’s theater department was handing out left-over tickets to a performance at the Four Seasons in Toronto. I had never been to the opera before, nor do I speak Italian, so as such the title, composer and majority of the plot escape my memory. However, the event remains vivid.

Being a naive university student – having studied the historical periods in which operas were composed,  watched movies in which going to the opera was a thing people did, and having nothing more exciting to do that weekend – we decided that this was an important event. Convincing some others to join our expedition into the world of high art, the plan was to dress for a night in the big city, take the inter-city bus to Toronto, and pretend like we belonged.

As we traveled down the Queen Elizabeth Way on a crowded ‘Go’ bus, I was obviously the only person wearing a tuxedo. I consoled myself with imaginary conversations whereby I explained to the other gawking passengers that we were going to the opera. I was told that the Four Seasons was Canada’s big theatrical stage, so I had pieced an image in my head that this venue would be like great Royal Opera House in London or the Metropolitan in New York. Thus one can imagine my disappointment when we finally arrived at the Four Seasons and it was more similar to an Apple store. As we wandered into the gigantic glass cube I quickly realized that I was the only person wearing a tuxedo.

I found no consolation in my imagination this time – a relaxed business casual attire was clearly the norm. Nevertheless, we filed into our seats and began to enjoy the performance. Soon enough intermission was upon us and a drink seemed to be in order. However, in looking past the lines of comfortably dressed folks to the price list I saw that the cheapest item listed was a nine dollar glass of wine. Accordingly, a friend and I did the only sensible thing and took to the streets to enjoy the flask of whiskey which had been prepared for such distressing circumstances.

By the time we had returned from our refreshment the crowds were still in the lobbies, many with a glass of house wine in hand. The alternate hands of the peckish were occupied by what was clearly the cheapest comestible on the menu – a chocolate ice cream bar on a stick. Needless to say, I realized at this point, surrounded by the high society of our time nibbling their Haagen-Dazs and sipping red wine, that the opera was not what I expected.

Only a century ago, a man in a tuxedo would have appeared bizarrely underdressed for such a cultural event. So how is it that I, a poor university student with a twenty-five dollar used tux, managed to be the best dressed that day?  When speaking to the laity on how to dress, St. Francis de Sales says: “I would have my devout persons, whether men or women, the best dressed of the company, but with the least pomp and affection,… adorned with good taste, propriety and dignity.” Although I admire and cherish these wise words, where does that leave ‘devout persons’ in a world where a used suit at the opera makes you conspicuously pompous amongst a sea of denim?

In wiser days, St. Francis de Sales wrote that the efforts of evangelization, “that is, the proclamation of Christ by word and testimony of life,” (CCC, 905) worked to convince men to leave behind the appeals of a worldly life and to seek the consolations of eternal life. It may seem easy to conclude upon an initial assessment of the present state of affairs that our culture is descending into depravity at an unprecedented rate, giving cause for much lamenting and despair. However, in the tide of my embarrassment that evening I did learn one important lesson: namely, that our modern world is actually quite bad at being worldly. Hence, I should like to suggest that the sins of today are not those coldly committed by a world gone rogue, but rather those performed by an ignorant group of amateurs that don’t quite know what they’re doing.

St. Augustine of Hippo once commented that “grace builds on nature.” Accordingly then, we are pressed in our present day to ask, “How do we proclaim Christ and a life of grace to the world when the world seems wholly unfamiliar with itself?” Gluttony has been pushed aside for dieting fads, unwholesome revelry substituted for some sedating screen,  rash actions for lazy inaction, and vanity in appearance for a “do I really have to get out of pajamas” disposition. When one looks closely at the state of the times they’ll see that the sins of today are not enjoying the world too much, but rather not enjoying the world enough. The new evangelization, therefore, must begin by proclaiming the world to the world, before proclaiming Christ to the world. That is, restoring the foundation of man’s nature so that grace may have something to take root upon. It falls to the new evangelization to teach the feast before the fast, dancing before abstaining, celebrating before secluding, and the tux before tonsure.