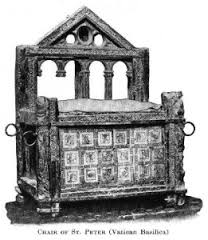 The Chair of Saint Peter, is a comforting one, a symbol of the ‘pillar and bulwark’ of the truth, which is the Church, signifying by synecdoche the office of the papacy, instituted by Christ, as recounted in today’s Gospel from the sixteenth chapter of Saint Matthew:

Simon Peter replied, “You are the Christ, the Son of the living God.” And Jesus answered him, “Blessed are you, Simon Bar-Jona! For flesh and blood has not revealed this to you, but my Father who is in heaven.  And I tell you, you are Peter, and on this rock I will build my church, and the powers of death shall not prevail against it. I will give you the keys of the kingdom of heaven, and whatever you bind on earth shall be bound in heaven, and whatever you loose on earth shall be loosed in heaven.”

The feast reminds us of the authority bestowed on the office of the papacy, his task to shepherd the universal Church, and is a reminder for us to pray for the one holding the office, remembering that its duties and burdens, the most significant authority that can be wielded on this Earth, weigh heavy even upon the best of men. There is a reason why the first room the Pope enters to vest after his election is called ‘the chamber of tears’. The Oval Office of the President has nothing on the Chair of Saint Peter, as Stalin’s ironic quip ‘how many divisions has the Pope?’ soon made clear.

Saint Peter himself was a flawed man, as is every Pope, more or less – sinners and saints, the worldly and the mystics. Right after his confession, after Christ praises Peter’s confession of faith, and promises the papacy to him, our Lord in almost His next breath rebukes Peter as ‘Satan’, for tempting Him against the Passion He must undergo, with whatever good and compassionate intentions on the part of the soon-to-be first Pope. For although the Church gives comfort in one sense – in its original etymology of ‘giving strength’ – the life of comfort and ease is not God’s way, as Peter was soon to understand. As Thomas More, who went to the chopping block defending the papacy, put it centuries hence, ‘we get not to heaven on feather beds‘. And as Christ later reveals to Peter at the end of Saint John’s Gospel:

Truly, truly, I say to you, when you were young, you girded yourself and walked where you would; but when you are old, you will stretch out your hands, and another will gird you and carry you where you do not wish to go.”  (This he said to show by what death he was to glorify God.) And after this he said to him, “Follow me.”

In our day, we must learn to distinguish, with the wisdom Christ offers, even more clearly between the ‘man’ and the ‘Pope’, for the full authority of the papacy, including the divine authority to ‘bind and loose’, is only exercised under certain conditions (cf., The Dogmatic Constitution on the Church, Lumen Gentium, 25, a very essential paragraph for all Catholics to read), truths and decrees to which we must give either the assent of faith (fidei obsequium, to that which is part of divine revelation) or religious submission of mind and will (obsequim religiosi animi) to that which is at least authoritative). These conditions that are quite fulfilled in interviews, articles and impromptu replies to reporters’ queries.

The Holy Father says many things – current Popes more than others in history – and our faith does not call for blind obedience nor conformity to each of his opinions and musings. Rather, while leaning on the ‘rock of Peter’, we must also exercise our reason – the ‘tangle of our wits’, to return to More – to discern how to apply the teachings of the Church given us through the papacy, as well as what does bind our conscience, and what does not. Only so may we be formed, with the help of the true Magisterium, more and more into the image and likeness of Christ.  As Cardinal Newman quipped in his Letter to the Duke of Norfolk, if he had to toast to the Pope or conscience, he would toast conscience first, for the Pope and the Magisterium are not a replacement for, but rather a support and guide to, our conscience, the ‘aboriginal vicar of Christ’ and the ‘proximate norm of morality’.  Yes, there are many truths to which we are bound, but even here, this ‘binding and loosing’ are offered and chosen in freedom and peace, suaviter et fortiter, sweetly, yet strongly.

We should pray for wisdom, strength and discernment on the part of the Pope, that he continue to grow in holiness and truth, discerning what is prudent and good, and what is not, and so lead many souls to heaven.  At the same time, we should also pray the same for ourselves.