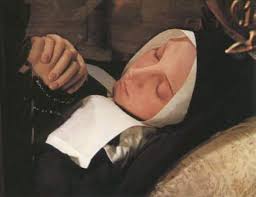 “I am the Resurrection and the Life. He who believes in Me, though he may die, he shall live. And whoever lives and believes in Me shall never die. John 11: 25-6.

Easter 2018. Plaster may be falling on worshippers at St.Peter’s in Rome and Pope Francis may or may not have denied the existence of Hell (see today’s Nota in Brevis), but the Cross at Calvary is still the point where Time intersects with Eternity. Our Lord Jesus Christ is still risen from the dead. And today, the Son of God – Who was born of the Holy Spirit, crucified, died and was buried and then rose from the dead, overcoming Death and saving mankind from his sins – sits at the right hand of the Father from where He will come to judge the living and the dead.

This is the centrepiece of the Catholic faith. This is what we believe. And today, this central belief remains as immutable as it was on the first Easter. Just as the prophets foretold and as fulfilled in the flesh by Jesus of Nazareth.

The death and resurrection of Jesus Christ is not a concept. It is not a legend. It is not a myth. It is a fact. A unchanging reality. A profound, absolute and thoroughly documented truth that stands at the centre of all human history and which the world has been simultaneously embracing and rejecting ever since.

This is understandable, given the events of Christ’s life which were often so incredible that faith was required to absorb their full meaning and eternal power. Just as it is today. Which is why the first sceptics were the chief priests of the day who remembered how Jesus foretold His death and resurrection and then were confronted with its fulfilment. Imagine too the shock of the guards at Jesus’ tomb when, on the morning of the third day, they saw an angel rolling back the stone from the sepulchre and were then confronted by the sight of the risen Jesus, His face shining as the sun. In awe, they are said to have dropped to the ground and then fled in terror.

This was and is Jesus, the man without sin whose body was incorruptible and whose resurrection was living proof that, as the firstborn of the dead, His resurrection opened the way for all to follow Him in a resurrection like His when He returns.

Was the Risen Christ a harbinger of The Incorruptibles? A sign and proof that the physical result of a sinless life may actually be manifest in the human body when, after death, it is discovered intact and without decay?

Throughout  human history, bodies have occasionally been found relatively intact after thousands of years in an atrophied state, having been either accidentally or deliberately preserved – such as Egyptian mummies.

These, however, are not The Incorruptibles whose unpreserved bodies have been found intact, incorrupt, often completely pliable and emanating a heavenly scent. Moreover, the Incorruptibles have existed only since the early days of Christianity, beginning with St.Cecilia (unknown-177AD), the martyr and patroness of musicians whose body was found intact during an exhumation in 1599. And while the bodies of other saints have been found in various states of preservation, in most cases the pliant state of these bodies defy the laws of nature in that their conservation has been unaffected by the manner of burial, by the temperature or the place of interment.

“Nor were they adversely affected by extended delays between the time of death and their burials, by moisture in their tombs, by rough handling, by frequent transferences, by covering with quicklime or by their proximity to decaying corpses,” writes Joan Carroll Cruz in her landmark 1977 book, The Incorruptibles.

“The greater majority were never embalmed or treated in any manner, yet most were found lifelike, flexible and sweetly scented many years after death, in sharp contrast to the other two classifications (deliberate or accidental preservation) who, without exception were found stiff, discoloured and skeletal. The mystery of their preservation is further compounded by the observance of blood and clear oils – which have proceeded from a number of these holy relics – a phenomenon that again, needless to say, was never recorded with regard to the deliberately or accidentally preserved.”

Superceding all these forensics are two startling facts. The first is that all the Incorruptibles are known for their lives of sanctity, suggesting a state of total sinlessness. And secondly, there are so many of them. So many of these saints who followed in the steps of Jesus Christ, who obeyed His commandments and who lived for His Love. And whose bodies were later discovered to be incorrupt.

So do these Incorruptibles provide hard evidence that sin actually causes putrefaction not only of the soul but also of the body? Does the lack of physical corruption in death point directly to the literal truth of so many scriptural verses? That “the wages of sin is death”?

Most readers will be aware of the scepticism surrounding this mysterious phenomenon. Sceptics have always been eager to discredit any aspect of this. They can also be depended upon to provide “scientific” explanations, however complicated and convoluted, which attempt to deny the obvious evidence before their very eyes – that the incorrupt body of the saint reclining peacefully before them is just that. Incorrupt!

But t’were ever thus, as my mother used to say.

On the one hand, the official world continues to exhaust itself with ever more elaborate – and usually “scientific” – denials of the existence of the very God Who created them and the world in which they live. On the other hand, God Himself counters these denials in ways only He can. The Incorruptibles are just one example of an otherwise inexplicable and miraculous manifestation in which the Lord Himself might be saying: “Consider that everything – everything –  I’ve told you is true, not just metaphorically, but literally!”

And perhaps it’s cheeky to wonder out loud, but do you think God smiles to Himself when some lauded scientist scratches his head over the sight of, say, St.Lucy Filippini, in her crypt in Montefiascone, who died in 1732 and whose body was found almost entirely incorrupt in 1926 when she was beatified?

Such as St.Bernadette Soubirous, to whom Our Lady appeared at Lourdes. When her body was exhumed in 1909, thirty years after her death, it was found without the least trace of corruption. The left knee was found much smaller than the right, which had been affected by tuberculosis. Her perfect hands held a rosary that had become rusty and the crucifix that lay on her breast was coated in verdigris. Since then, her face and hands have been coated in wax but her entire body remains intact and can be visited by the devout and the curious alike who will draw their own conclusions.

As with everything the Lord does, however, He has imitators, many who hate Him and proudly profess their atheism.

Take Vladimir Lenin who died in 1924 and whose minions took weeks to mummify his body so it could be publicly worshipped at the Kremlin in Moscow. Particularly every July 17, the anniversary of the day in 1918 when the Bolshevik revolutionaries executed Russia’s last tsar, his wife and five children and the Soviet communist nightmare became institutionalized.

The same thing happened at the death of Josef Stalin when this embodiment of Soviet ideology was also mummified and laid to rest beside Lenin in the marble mausoleum in Red Square. But Stalin’s deification lasted only eight years until, in 1961, Soviet leader Nikita Krushchev ordered the bloody dictator’s removal as the final symbol of his fall from ideological grace.

All of which confirms once again British philosopher Roger Scruton’s maxim about the faithless whose god is this world and whose practices sometimes mimic the faith they hate: “Today’s secular world is dominated by a theology of another kind – a godless theology, to be sure, but no less insistent upon unquestioning submission to doctrine, and no less ardent in its pursuit of heretics, skeptics and debunkers.”

Which brings us back to the Old Testament where the coming of Jesus was predicted repeatedly and where the truth of mankind and his permanently fallen condition is expressed succinctly and peerlessly: “The fool hath said in his heart: There is no God, They are corrupt, and are become abominable in their ways: there is none that doth good, no not one.” Psalm 14:1

But we rejoice nevertheless! Not because man is good – which he is manifestly not – but because Christ is risen, having saved our souls and opening our way to heaven simply by following Him. And because He told us so: “I have told you these things, so that in me you may have peace. In this world you will have trouble. But take heart! I have overcome the world.” John 16:33