To produce a “catechism in stone”—that’s how one of North America’s leading architects describes the work of building and city planning. I recently had the privilege of speaking with Mr. Dino Marcantonio—a native of Ottawa—who, along with his wife, Dr. Paloma Pajares, runs an architectural firm in New York City. Mr. Marcantonio has held academic posts at the University of Notre Dame and Yale University, and is among a group of leading architects helping to revive classical architecture. In our discussion he describes the difference between “classical” and “modernist” architecture, how his Catholic Faith informs his practice, and what laypersons can do to help encourage beauty in building. For the full version of our conversation see the architecture page on Catholic Insight’s website.

How did you begin working in the “classical” tradition of architecture?

Can you describe some of the essential differences between classically-inspired architecture and modernist architecture?

DM: Classical architecture is about the representation and extension of a meaningful and objectively ordered universe. I use the term “classical architecture” very broadly to include the whole Greco-Roman tradition, with its roots in ancient Egypt, its refinement in ancient Greece, its expansion in ancient Rome, through the Byzantine, Romanesque, Gothic, and Renaissance periods, right up to the work being done today. So, if a Martian were to stumble into the city of Rome in the year 30 B.C., he would have understood perfectly what the pagan Romans understood about the purpose of human history and each individual life, since the buildings, by their scale, their architectural elaboration, and their placement, showed how they fit into that orderly universe. The high status architecture of the temples, for example, was an expression of the supreme importance of the gods and the piety owed to them. Christian cities, likewise, represent a Christian universe. If one could take all the buildings extant in Rome at the end of the 17th century and line them all up in order, with the most architecturally elaborate at one end, and the least architecturally elaborate at the other, one would essentially see the Christian hierarchy of values, a Catechism in stone.

Modernist architecture, in contrast, springs from two sources: nihilism, which denies that the universe has meaning; and materialism, which denies that anything exists above the material realm. The result is architecture which strives to disorient so as to avoid the suggestion of a received order to the universe, and/or which idolizes the machine with industrial iconography so as to avoid the suggestion of the life-giving principles: the soul and God.

In what ways does your faith inform your architectural practice?

DM: The Faith teaches me that architecture, like Man himself, has a God-given nature, and that it is my responsibility to understand that nature and to submit myself to it. I can’t just make it up. Furthermore, each particular design brings with it certain responsibilities. Rather than treat each design as an occasion for “personal expression,” I strive to be a vehicle that God might express Himself. To modern ears all this might sound oppressive, but in fact it’s completely liberating and consoling. If I have done my job well, then the truth is my ally and my audience is justly served. If I have not, then I know how I can improve for the next opportunity. In addition, I am given the laboratory of history in which I can learn from the successes and mistakes of my forebears. The contrary—self-expression into the void—is what is stifling, oppressive, even terrifying, as there are ostensibly no shoulders to stand on, and no standards by which to make judgments. One is at the mercy of the Will to Power.

How can non-architects who find themselves in positions of civic authority, or, say, on a church building committee, argue effectively for traditional designs?

DM: It is understandably difficult for the layman to face credentialed professionals. Yet even a professional should accept that the layman has the right and authority to argue for common sense. For example, a layman is perfectly within his rights to argue for: (1) Architecture which is beautiful. Do not settle for the excuse that beauty is in the eye of the beholder. Beauty (like ugliness) is in the thing itself. (2) Architecture which suits the institution. It doesn’t make sense to build a warehouse which looks like a church. Likewise, it doesn’t make sense to build a church which looks like a warehouse. (3) Architecture which reinforces the identity of the community, inextricably bound up with its particular architectural traditions. To introduce alien forms which undermine a community’s identity is effectively to rob people of their identity.

The layman might also enlist the help of professionals and scholars who have the arguments and the credentials. And, needless to say, if you want a traditional design, make sure you hire an architect who knows how to get you one.

If a young person was interested to pursue the study of traditional architectural forms, where would you send him?

DM: I would advise a young person first to train his mind with the study of history and philosophy (ancient and Christian, especially St. Augustine and St. Thomas Aquinas) as an undergraduate. Then, for architecture school, the pickings are unfortunately slim. Notre Dame is the best option right now. There are a few other schools with good people on the faculty transmitting the tradition, but on the whole these programs are not conducive to a sound education. No matter what, a young person will need to supplement his accredited education. The Beaux-Arts Academy in Utah offers some excellent instruction, as well as the Institute of Classical Architecture in New York City. Fortunately, there are plenty of books for the autodidact, and at reasonable cost. Alberti, of course, is a must for a theoretical foundation. With respect to the craft, Harbeson’s The Study of Architecture is indispensable. And there are plenty of manuals on drafting and traditional ornament that were produced in the early 20th century, all of which should be pored over.

Can you discuss any recent designs that you’ve particularly enjoyed working on?

DM: Two projects spring immediately to mind: one a very large residence in Dallas, and the other, a mere kitchen table. Both demanded the most careful design, and the highest quality execution. The size of the project is not what gives satisfaction. What matters is the achievement of excellence, and that can be done at any scale. 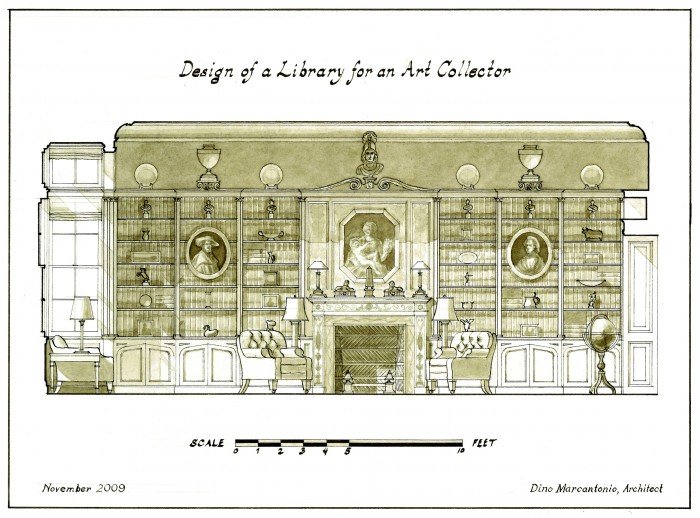