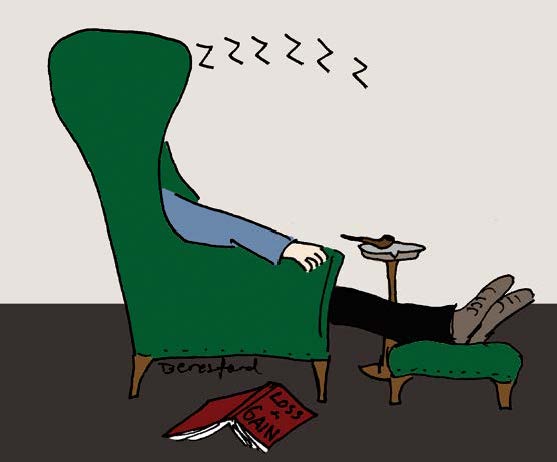 There are lots of books that I have never read and never will read. The act of not-reading is portrayed as passive, but there is activity in not-reading. For example, I have actively chosen to not-read anything written by those listed as Great Canadian Writers. I happily read Canadians who are not on this official list—such as Michael O’Brien, Robert Service, John Buchan, or Stephen Leacock. I once read two pages of a Margaret Lawrence novel—more than any sane man should have to suffer. As for the rest of the CanLit authors, the whole depressing miserable lot of them can wallow in their gloom without my taking part in the festival of misery.

My reasons for not-reading such writers is that I know they will cause me to become unmanned. Some folk can read Hemingway and revel in his style or take delight in his insight into human nature. The little I know from not-reading Hemingway makes me certain that his worldview will disillusion me and add the burden of his reality to my mind.

I do not want to see Our Lord in black splotches. I am quite happy seeing Him at Mass at the elevation. Let splotches be splotches, I say, and let holiness be hidden and idealized; let evil be common and dull. Then along comes some well-intentioned self-appointed missionary who will not leave me alone until I am converted: “Look there—a beard! There—the eyes—nose—and mouth! … See? Can you see it?”

And, against my will, in spite of myself, the splotches become an image of a bearded man with pathetic gentle eyes in the style of the very worst religious art. Now seared into my mind is a saccharine portrayal of Our Lord that is not mine, I do not know whose it is, but it is not the one I find at Mass or in the Rosary.

I agree that the image is really there, so in this way I have had my eyes opened to a reality. But the splotches are also really there as splotches. One reality has forever supplanted the other reality in my mind’s eye—it is a one-way event. I cannot re-possess the splotches: for me they are gone forever.

In a way, I have lost a kind of first innocence. The splotches are not splotches any longer; now they carry someone else’s meaning. For my dog the splotches remain. When I show this picture to my dog, he only looks to see if it is good to eat, and then turns away unruffled.

So with my not-reading, I suppose I could be charged with narrow-mindedness or prudery. I disagree. My objection is not that my rejected writers are irreligious, but that they are unmanly. They glorify decrepitude and spread cynicism. It is hard enough to keep a hold of that quiet, halting courage that men need to be faithful husbands and fathers, to keep getting up to look for work after being laid off, to keep eating sandwiches in waxed paper to save money for second-hand children’s clothes, and to keep loving our country. This is the day-to-day courage that trained our parents and grandparents so that when their country called or their religion was threatened, they could answer and remain steadfast.

Courage to remain steadfast—this is missing in modern literature, even as an ideal. Steadfastness is made fun of as timid, prudish, or narrow-minded. Cynics, convinced that they are being realistic, delight in deflowering young minds. Think of how many students are forced to read Old Man and the Sea, The Scarlet Letter, Lord of the Flies, Such is my Beloved, or The Great Gatsby, but are never told about Treasure Island or The Pickwick Papers. In school I was forced to read The Pearl by John Steinbeck and the wretched thing continues to infect me like a pustulating sore that will not heal.

I will do without these gloomy scribes: I will not give up my right to see the real world through Christian eyes.