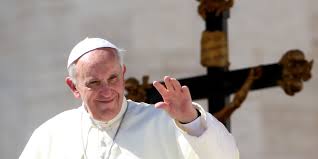 (Here are words from our current Pontiff, Pope Francis, to help begin our Lenten journey.  His message continues the tradition of the Holy Father to exhort us to metanoia and good works.  All well and good.  My only problem is his exhortation towards the end to realize a ‘world with no poor’, something he has mentioned before, which I have a difficult time jibing with our Lord’s words that the ‘poor you will always have with you’.  I suppose we may take the Pope’s words as an ideal which will never really be realized, sort of a moral asymptote for which to strive.  After all, to paraphrase Chesterton, if you don’t have ideals, you will never have practice.  Anyway, onwards we go, and may the good God be with you.  Editor).

Dear Brothers and Sisters, Good morning and have a good Lenten journey!

It is fitting and meaningful to hold this Audience on Ash Wednesday. We are beginning the Lenten journey, and today we stop to consider the ancient institution of the “jubilee”, an ancient custom attested in Sacred Scripture. In particular we find it in the Book of Leviticus, who presents it as a culminating moment in the religious and social life of the people of Israel.

Every 50 years, “on the day of atonement” (Lev 25:9), when the Lord’s mercy is invoked upon the whole people, the sound of the trumpet announced the great event of liberation. In fact we read in Leviticus: “And you shall hallow the fiftieth year, and proclaim liberty throughout the land to all its inhabitants; it shall be a jubilee for you, when each of you shall return to his property and each of you shall return to his family[…]. In this year of jubilee each of you shall return to his property” (25:10, 13). In accordance with these dispositions, if someone had been compelled to sell his land or his house, in the jubilee year he could regain possession of it; and if someone had contracted debts and, being unable to pay them, was compelled to place himself in the service of the creditor, he could return debt free to his family and regain all of his property.

It was a type of “general pardon”, by which everyone was allowed to return to their original situation, with the cancellation of all debts, the restitution of land, and the opportunity for freedom to be enjoyed once again by the members of the People of God: a “holy” people, where regulations such as that of the jubilee year served to combat poverty and inequality, guaranteeing a dignified life to all and an equitable distribution of land on which to live and from which to draw sustenance. The central idea is that the land originally belonged to God and has been entrusted to man (cf. Gen 1:28-29), and therefore no one may claim exclusive possession, thereby creating situations of inequality. Today we can consider and reconsider this; each one in our heart think about whether we have too many things. Why not leave them to those who have nothing? Ten per cent, fifty per cent…. I say: may the Holy Spirit inspire each of you.

Along the same lines, other institutions and other laws also governed the life of the People of God, so that it could experience the mercy of the Lord through that of men. In those laws we find indications that are valid even today, which call for reflection. For example, the biblical law required “tithing” to benefit the Levites, [the priests] in charge of worship, the landless, and to the poor, the fatherless, and widows (cf. Deut 14:22-29). It provided, in other words, for one tenth of the harvest, or of the proceeds of other work, to be given to those who were without protection and in a state of need, thus fostering conditions of relative equality within a people in which everyone had to behave as brothers.

There was also a law concerning the “first fruits”. What is this? The first part of the harvest, the most valuable part, which had to be shared with the Levites and with strangers (cf. Deut 18:4-5; 26:1-11), those who owned no fields, thus ensuring for them too that the land be a source of nourishment and life. “The land is mine; for you are strangers and sojourners with me”, says the Lord (Lev 25:23). We are all guests of the Lord, awaiting the heavenly country (cf. Heb 11:13-16; 1 Pet 2:11), called to render habitable and human the world which welcomes us. As regards the “first fruits”, the more fortunate could give more to those who are in difficulty! So many first fruits! The first harvest not only of the yield of the fields, but of every other product of work, of wages, of savings, of so many things that are owned and that at times are wasted. This happens today too. In the Office of Papal Charities so many letters are received containing a little money: “this is a part of my wages in order to help others”. This is beautiful; helping others, charitable institutions, hospitals, rest homes…; also giving to strangers, those who are foreigners and sojourners. Jesus was a sojourner in Egypt.

Precisely in this consideration, Sacred Scripture persistently exhorts a generous response to requests for loans, without making petty calculations and without demanding impossible interest rates: “And if your brother becomes poor, and cannot maintain himself with you, you shall maintain him; as a stranger and a sojourner he shall live with you. Take no interest from him or increase, but fear your God; that your brother may live beside you. You shall not lend him your money at interest, nor give him your food for profit” (Lev 25:35-37). This lesson is always timely. How many families there are on the street, victims of profiteering. Please let us pray, that in this Jubilee Year the Lord remove from every heart this desire to have more, to exploit. That we may return to being generous, great. How many situations of exploitation we are forced to see and how much suffering and anguish they cause families! And so often, in desperation, how many men end up committing suicide because they cannot manage and do not have hope, they do not have a helping hand extended to them; only the hand that comes to make them pay interest. It is a grave sin, usury is a sin that cries out in the presence of God. The Lord instead promised his blessing to those who open their hand to give generously (cf. Deut 15:10). He will give to you twofold, perhaps not in money but in other things, but the Lord will always give you double.

Dear brothers and sisters, the Bible’s message is very clear: be courageously open to sharing, and this is mercy! If we want mercy from God, let us begin to practice it. It is this: beginning to practice it among ourselves, among compatriots, among families, among peoples, among continents. Contributing to the realization of a world with no poor means building a society without discrimination, based on solidarity that leads to sharing whatever we possess, in a distribution of resources founded on brotherhood and on justice. Thank you.