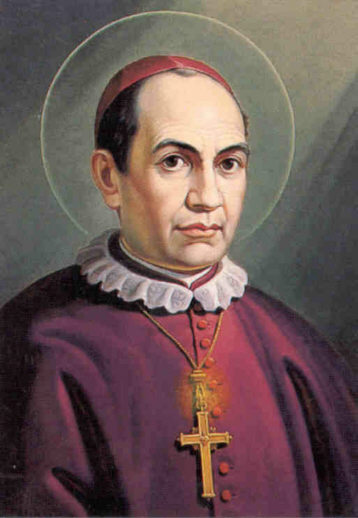 Anthony Mary Claret died on this day, October 24th, 1870, after a long, full and adventurous life, demonstrating how much one man can do if he puts his mind and will wholeheartedly to the plow in God’s vineyard – if that’s not a mixed metaphor. Most of the life of this priest, and eventual bishop, was spent in Spain, with eight very fruitful years as a missionary bishop in Santiago, Cuba. Amongst other things, he reorganized the seminary, shored up priestly discipline and validated over 9,000 marriages!.

In the midst of his near-overwhelming pastoral duties (including confessor to the Queen, Isabella II), St. Anthony Mary also penned 144 (!) books, untold numbers of sermons – he once preached twelve sermons in one day – drew up rules for religious Sisters, and founded a religious Order, the Congregation of the Missionary Sons of the Immaculate Heart of Mary, commonly known as the ‘Claretians’ – who now number 3100 members in 450 houses across the world. As one priest I know put it in a sermon, one breaks out into a sweat just thinking about how much Saint Anthony Mary Claret accomplished – but, then, he had made a promise to himself never to waste a moment of time. (That said, I’ve often wondered about such vows, such as always doing the ‘most perfect thing’. Is quiet contemplation on a solitary walk through the forest a good use of time? We must also beware the spectre of activism, but I think our saint, like the also-very-busy-and-productive John Paul II, knew what he was about – we’re all led by the Spirit in our own way, we may hope!)

One of his primary works and loves was offering missions wherever he went, which were so well attended that a makeshift pulpit had to be set up outside the church, after which he would spend hours in the confessional, with the gift, it is said, of readings souls and hearts. And, speaking of hearts, his own, on fire with such a love for the materially and spiritually poor, was found incorrupt seventeen years after his death.

As he wrote in one of his countless letters, quoted in today’s Office:

The man who truly loves God also loves his neighbour. The truly zealous man is also one who loves, but he stands on a higher plane of love so that the more he is inflamed by love, the more urgently zeal drives him on. But if anyone lacks this zeal, then it is evident that love and charity have been extinguished in his heart. The zealous man desires and achieves all great things and he labours strenuously so that God may always be better known, loved and served in this world and in the life to come, for this holy love is without end.

A life well and truly lived, producing ten talents from what he had been given, quite a different view of evangelization from a more recent South American bishop, who has apparently boasted – not lamented, mind you – of never having baptized a single person in his many years as a missionary. Odd. Sort of the inverse of Bishop Claret, one might think.

Anthony Mary fell ill while in Rome preparing to attend the First Vatican Council called by Blessed Pius IX. He withdrew to rest in his native Spain, eventually going to a Cistercian monastery in southern France, whence, quite fittingly, he went peacefully to his eternal reward in 1870. He was canonized eight decades later by Pope Pius XII in 1950, the same year he declared the dogma of the Assumption of Our Lady, to whom our saint was so devoted.

Would that a small fraction of us had a scintilla of the zeal, and produced but a smidgen of the fruit, of Saint Anthony Mary, so that the fire that Christ desires to be ‘cast upon the earth’ would indeed ‘be already kindled’. When He returns in glory, may He indeed find firm faith, and charity that, far from gone cold, burning brightly in our own hearts.

We can always hope, for what is life without it?

Today, in the calendar of the usus antiquior, is the feast of Saint Raphael the Archangel, who is now celebrated with the Michael and Gabriel on September 29th. But we may call him to mind especially today, especially for any healing or marital issues, or for those readers looking for a good and holy spouse. As mentioned, hope, even against hope!