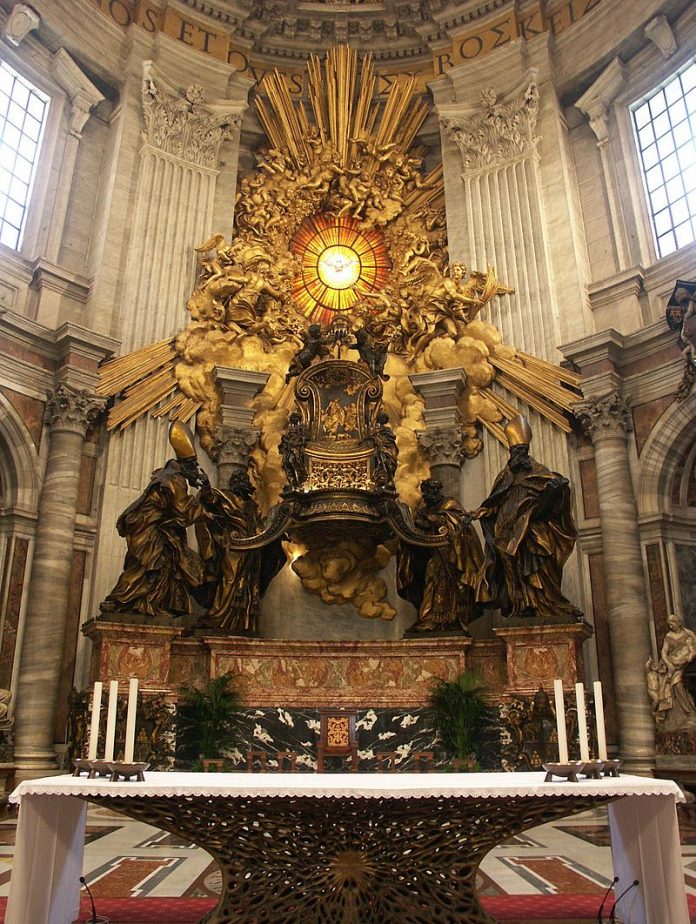 It might seem odd to celebrate a ‘chair’, even one of Saint Peter, but today’s feast commemorates not a physical object, but the office of the papacy bestowed upon the Apostle Simon, whom Christ christened Peter – Kephas – as the ‘rock’ upon which the Church would be founded.

Of course, Peter himself, the fallible and weak human, is not the rock, but rather the office he carried, as Vicar of Christ, Who Himself is the infallible source of truth, against Whose Mystical Body, the Church, the gates of hell will not prevail.

That is why a man is Pope only so long as he holds the office, and only insofar as he exercises the office while holding the ‘chair of Peter’. Pope Emeritus Benedict who (conspiracy theories aside) is no longer Pope after lawfully resigning, was not writing ‘as Pope’ when he penned his trilogy on the life of Christ, but rather as a private theologian; the same goes for Pope John Paul II in his own memoirs and reflections.

Yet, for all its current canonical intricacies, the office of Pope is still a startling one, offering the man upon whom it is bestowed ‘full, supreme and universal’ authority to teach and govern, as the Church’s own constitution, Lumen Gentium, declares (#22).  He can exercise the Magisterium personally without the collegiality or even the consent of the five thousand or so bishops around the world.  No human corporation would give its CEO this level of governance.

That is because no human corporation is governed by Christ, who is ultimately in charge, and who gives any Pope, good, bad or indifferent (and there have been all kinds amongst the 266 so far in history) to do not so much what the man behind the office wills, but rather, at the end of the day, by hook or by the crook of his crozier, by ways straight or labyrinthine, ultimately what God wills.

Yet – contra the strange opinion of a certain Canadian priest – the Pope is indeed bound by the Tradition that has come before him. He cannot undo what previous Magiisteria and Pontiffs have bound by infallible teaching.

We should keep this truth firmly in mind when sifting through the current ambiguity emanating from the Vatican.  Things will be clarified in due time, which is God’s good time, and the clanging gongs and noisy cymbals obscuring the immutable truth will be quieted.

The actual original chair – cathedra – of Saint Peter, which by tradition was used by the first Pope, is still in the basilica which carries his name, now covered by a gilt-bronze casing designed by the great Bernini (the genius to whom we also owe the beautiful baldacchino above the altar). Analysis just after the Second Vatican Council claims the artefact dates to no earlier than the sixth century, but who knows? Scientists also – perhaps knowingly –  mis-dated the Shroud of Turin. If there is one thing always evident in science, it is some healthy dose of doubt and skepticism, for human reason and inductive inference are always prone to some degree of imperfection, bias and error.

In the end, it matters not much, for our faith is in neither a wooden nor a gilt-bronzed chair, both of which will one day pass away, but in a Person, whose words will never pass away, and whose truths are more certain than any of those in natural science, as certain as their infallible source.  Christ is the way, the life and the truth, and what He speaks is about as certain as one can be.

Then again, the manner in which the truths of the faith are expressed by their human interlocutors can at times be covered and obfuscated by ambiguity, even intrigue, which is why, as Josef Pieper wrote, the two hallmarks of theology should be clarity and precision, so we may believe and live by that belief without hesitation or doubt.

We have such ‘clear and precise’ teaching in the panoply of previous Pontiffs, especially from Leo XIII onwards, which help us see through some of the current theological and moral haze.

And speaking of moral hazing, as the ‘sex abuse synod’ continues, pray for the Pope today, the current man behind the throne, that, whatever his own weaknesses and even his agendas, good and not-so-good, hidden or overt, he may be given the grace to carry his office well, to see and be confirmed in the truth, and in so doing, as Christ commanded Peter, he may confirm the brethren.  The papacy is a heavy burden, and the man who holds it carries the consciences of many on his shoulders.

Yes, the waves seem to be crashing into the very barque of Peter, but Christ will awake soon enough, and by one Word, all will be made calm, limpid and clear; we will then see the purpose and design behind the current confusion.

At the very least, we might posit, all the underground and simmering rebellion against the truth in the past decades is now being brought out into the open, and the clear light of day, a painful, but necessary, process.

So hold on, dear reader, for that time of manifestation, of revelation, even, we might say in the Greek, the very apocalypse, may well be closer than we think.