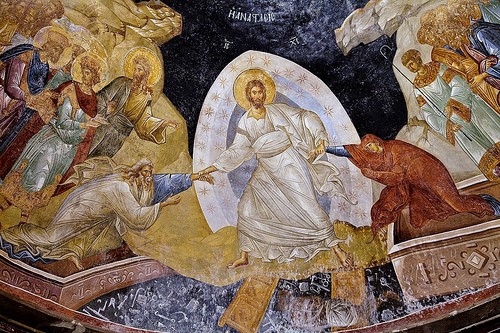 After the transit of the Red Sea, let us sing to Christ, our leader,

as, in the white robes of salvation, we look forward to the supper of the Lamb,

whose holiest body was parched, on the altar of the cross;

but we live by tasting, the roseate blood of God.

On that paschal evening, we were protected from the devastating angel

and snatched from the harsh rule of Pharaoh.

Our pasch is now Christ, the innocent lamb who was slain,

who offered his flesh as the unleavened bread of sincerity.

O truly worthy victim, by whom hell is shattered,

a captive people is redeemed, and the rewards of life are restored!

Christ rose from the grave, the victor has come back from the abyss,

putting down the tyrant with a chain and reopening paradise.

O Jesus, be for our minds an everlasting paschal joy,

and join us to your triumph,we who have been reborn to grace.

O Jesus, glory be to you, who, death having been conquered,

are resplendent with the Father and the nourishing Spirit forever.

In speaking of things liturgical, an alternate chronology is employed, for anything less than a thousand years old is considered a novelty, such as the new-fangled feast of Corpus Christ, a mere 750 years old. With a sigh of relief, then, we note that the Easter hymn Ad cenam Agni dates back to the five hundreds, a respectable millennium and a half from the present.

We Catholics are accused of being ignorant of Scripture. Maybe so, but even the most obtuse of us will catch the biblical inspiration of every verse of this ancient hymn. The opening lines resonate across the sacred text, with a reference to our admission to “the supper of the Lamb.” We know who that Lamb is from John the Baptist’s exclamation as Jesus approached him at the Jordon: “Behold, the Lamb of God!” It is the Lamb who was slain and yet lives that we find celebrated in the Book of Revelation, the paschal Lamb whose blood on the door posts of the Israelites in Egypt was a type, or symbol, of the blood of Jesus. As the Jews of old were spared a visit from the angel of death—“protected from the devastating angel”[1]—so Christians whose lips are stained with the blood of the Lamb of God are assured eternal life—“ we live by tasting the roseate blood of God.”[2]

Similarly is the messianic banquet another scriptural theme. Christ at the Last Supper announced it to his followers: “Amen, I say to you that I shall not drink again of the fruit of the vine until that day when I drink it anew in the Kingdom of God.”[3] We learn more about it from the Book of Revelation: “Bless are those who are invited to the marriage supper of the Lamb.”[4] And Isaiah prophesied it: “On the mountain, the Lord of hosts will make for all peoples a feast of fat things, a feast of wine on the lees well refined.”[5]

The verse also refers to “the white robes of salvation.”[6] These robes are white because they have been washed in the blood of the Lamb.[7] In the sixth century, when this hymn was first in use, the newly baptized entered the church building wearing white robes, to participate, for the first time, in the full Mass. (Before baptism, catechumens would have been dismissed after the sermon.) Can you in imagination enter that church with the newly baptized? They had just completed the forty days of Lent, with severe fasting and—surprising to us—without bathing, at that time a standard ascetical practice. Saint Jerome, for instance, in celebrating the virtues of his patroness, Saint Paula, noted that she never bathed. “Cleanliness is next to ungodliness” was the slogan then. The candidates for baptism would have visited the public baths on Holy Thursday in preparation for their baptism on Holy Saturday night. That completed, they donned glistening white robes and moved from the shadowy baptistry into a church ablaze with candles and resounding with the chant of the congregation, as loud, Jerome says, as thunder. It was a spine-tingling event, all the more so because the newly baptised received the body and blood of Christ for the first time. It must have been an intriguing as well as an overwhelming experience since they came with no knowledge of the Mass of the Faithful or of the Real Presence. Only in the weeks following Easter did they receive the mystagogic catechesis during which the full meaning of the Eucharist was expounded.

Verses five and six describe the visit of Jesus to the realm of the dead—“the harrowing of Hell”—where the just men and women of the Old Testament were waiting for Jesus to break the power of Satan and lead them into heaven: “Christ, the new Adam, entered the kingdom of death to release all the just since the beginning of the world.”[8] This incident has been popular in the art of the Eastern Church. One of its most powerful presentation, dating from the fourteenth century, can be found in the Chora Church, now the Kariye Museum, in Istanbul (see featured image).

Christ is portrayed as rising . . . no, as springing from the dead. He is in the stance of an athlete, vigorous and dynamic. As he rises, he is pulling out of their tombs and old man and an old woman, Adam and Eve, symbolic of the universal effect of his death and resurrection: all mankind has been saved. At his feet we see the gates of hell smashed apart, with keys, bolts, hinges and bars thrown into the air, and Satan himself utterly defeated, lying bound at the bottom of the mural. If a picture is worth a thousand words, this mural speaks volumes.

Ad cenam Agni, like the other hymns we have been examining, is a tissue of biblical allusions. They remind us that the words of Scripture and the events they record are always contemporary to the believer who hears them proclaimed at Mass and reflects on them privately. We shall do so more effectively if we make use of the commentary provided by our rich Tradition in theology, devotion and art.

[5] Is 25.6. The “mountain” is Mount Zion, which is celebrated in the Book of Revelation as the new Jerusalem, i.e., the Church.

[6] The word “candidate,” as in politics, has its origin in the Latin word for white: candidus. The English derivate came to assume its political meaning because in ancient Rome a candidate for public office identified himself by wearing a white toga.