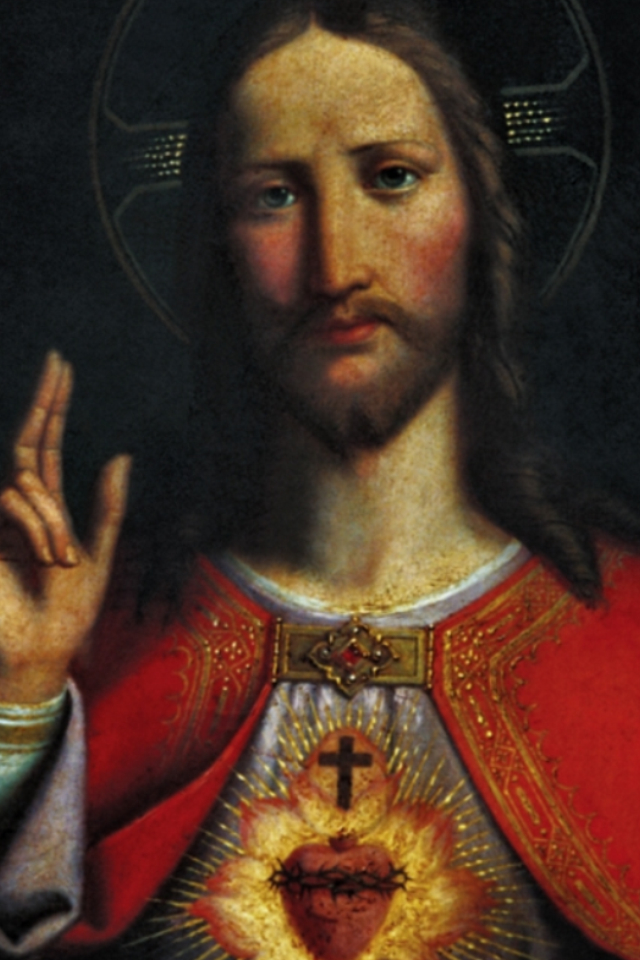 As part of the humanity of the Incarnate Word, the Sacred Heart is a creature.  Should, then, Jesus’s Sacred Heart be accorded the adoration of latria which is reserved for God alone?  The answer is, yes.  And this adoration involves no idolatry whatsoever.

In his profound and beautiful encyclical, Haurietis aquas (published in 1956), Pope Pius XII assigns two principal and timeless reasons why the adoration of latria ought to be given to our Lord’s Sacred Heart.  The first reason, which applies just as well to any  member of Christ’s body, has its basis in the Hypostatic Union.  Here it is essential to recall that when God the Son took a human nature to Himself, the result was neither one divine Person subsisting in one nature (as the Monophysites claim), nor two persons (one divine and one human) subsisting in two natures (as the Nestorians hold), but rather one divine Person subsisting in two natures (one of them divine and one of them human).

It is on this basis that the Second Council of Constantinople taught dogmatically, in 553, that by one and the same act of adoration we adore both the human nature of Christ and God the Son Himself.  The words of the Council are as follows: “If anyone says that Christ is to be worshipped in his two natures, and by that wishes to introduce two adorations, a separate one for God the Word and another for the man; or if anyone, so as to remove the human flesh or to mix up the divinity and the humanity, monstrously invents one nature or substance brought together from the two, and so worships Christ, but not by a single adoration God the Word in human flesh along with his human flesh, as has been the tradition of the church from the beginning: let him be anathema.”  From this conciliar text, then, we should understand not only that it is not idolatrous to worship our Lord’s Sacred Heart, but also that to adore any part of our Lord’s flesh is nothing other than to adore the divine Word Himself subsisting in that part of His human flesh.  We can think here of an analogy: whenever someone kisses another’s hand, the act of love or reverence manifested by the kiss is principally referred to the person to whom the hand belongs as a part.  In an analogous way, when we give the adoration of latria to the Sacred Heart of Jesus, this act of adoration is principally referred to the Incarnate Word to Whom the Sacred Heart belongs as one of His parts.

The second reason which Pope Pius XII gives bears more particularly on our Lord’s Sacred Heart.  This reason, he says, “arises from the fact that His Heart, more than all the other members of His body, is the natural sign and symbol of His boundless love for the human race” (paragraph, #22).  To understand this text, we must distinguish three different loves in Jesus.  First, He has the love which is an emotion and which, like all of His other emotions, exists in His body as in a subject.  Second, our Lord has the love which is the theological virtue of charity.  Like the emotion of love, the virtue of charity is something created.  Unlike the emotion of love, this theological virtue is a supernatural gift of God’s grace and has the will, not the body, as its proper subject.  Third, in Jesus there is the infinite and uncreated divine love which He shares with the other two Persons of the Blessed Trinity.

Referring to these loves, Pope Pius XII writes: “…the Heart of Jesus Christ, hypostatically united to the divine Person of the Word, certainly beat with love and with the other emotions — but these, joined to a human will full of divine charity and to the infinite love itself which the Son shares with the Father and the Holy Spirit, were in such complete unity and agreement that never among these three loves was there any contradiction or disharmony” (paragraph #41).

So, when we adore the Sacred Heart, we worship the Incarnate Word Himself and we also worship the Incarnate Word’s uncreated love.  Further, because of the perfect harmony existing among the three loves of Jesus, our contemplation of Jesus’s Sacred Heart may naturally lead us from a consideration of His lower loves to a consideration of the infinite and uncreated love of the Blessed Trinity.  And our consideration of these perfectly ordered loves in Jesus may well inspire us to beg Him to make our sinful hearts like unto His.  For the two reasons given by Pope Pius XII, then, let us readily and heartily offer to our Lord’s Sacred Heart the adoration of latria which is reserved for God alone.