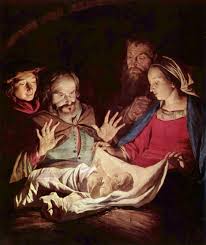 As Christmas rolls around this year, try not to be swept up with the hoopla of consumerism and economic materialism.  In our day and age, with the technology of smart phones, hi-speed internet, wi-fi access, iPads, new gaming systems, etc., it is easier than ever to get distracted from God, truth, and love.

The significance of Christmas, irrespective of the historical origins of its celebration, is the idea that the Second Person of the Trinity invaded the space-time created order and was incarnated as Jesus Christ, a being who is fully man and fully God, through the mystery of the hypostatic union. Jesus was the long expected Messiah who came to fulfill the Old Testament prophecies. The prophecies included that the Messiah would be born of a woman (Genesis 3:15; Matthew 1:20; Galatians 4:4) who was a virgin (Isaiah 7:14; Matthew 1:22-23; Luke 1:26-31) and that he would be called Immanuel, meaning “God is with us” (Isaiah 7:14; Matthew 1:23). He came to fulfill these and many other important prophecies.

In a time where we find people unthinkingly express their belief in moral and religious relativism, it is important to focus on truth. Christmas is such an opportunity. Moral and religious relativism is self-defeating since to communicate and reason we always assume that what we are saying and hearing is intelligible, otherwise no communication would be possible. Mere intelligibility suggests that there is a correspondence between the transmitter of the message and the receiver.  The message itself may be distorted through the process of communication but the fact that there is a message to be discerned is not in dispute.  This assumes truth through our capabilities of discernment.  If this were not the case, nothing would make sense at all.  The other thing to note is that relativists typically consider themselves to be progressive but under such a view there cannot be any progress since there is no standard to measure what is better or worse.  Moral and religious relativists, so to speak, have two feet firmly planted in mid-air.

The Prologue to the Gospel of John proclaims that the Word (the second person of Trinity) became flesh: “In the beginning was the Word, and the Word was with God, and the Word was God. He was with God in the beginning” (John 1:1-2). This is a profound statement of truth since the Word is the term for Logos in Greek which signifies in theology divine reason.  This is where logic and truth come from. The order of the universe is communicated through God’s speech. Not only does God embody reason and truth but truth is also enshrouded in love, as 1 John 14:6 states: “And so we know and rely on the love God has for us. God is love. Whoever lives in love lives in God, and God in them.”  It is this very love that is dispersed to all of us through God’s ultimate acts of love: creation, the Incarnation, Jesus’ self-sacrifice for our redemption and the promise of our future resurrection.  As Jesus commands: “A new command I give you: Love one another. As I have loved you, so you must love one another. By this everyone will know that you are my disciples, if you love one another” (John 13:34-35). The rest of the world will know us by the fruit of our love, not only how we love our family, neighbour but also our enemies who persecute us. This Christmas, remember to fix your eyes on God who is truth and love which propels us to be witnesses to the Gospel. Thus, charity in a time like this is vital but as George Michael in his song “Praying for Time” recognized, we should not let it be a “coat” that is worn only twice a year. It should be demonstrated and carried forth every day in whatever way possible. So, this Christmas season be witnesses to truth, love and God! A Merry Christmas to all!

Scott Ventureyra is a doctoral candidate in theology at Dominican University College in Ottawa, Canada.  His research focuses on the Christian conception of God and creation in understanding the origin of consciousness.  He has presented at a number of different conferences including the international conference on consciousness in Tucson, Arizona – The Science of Consciousness this past April.  He has published in academic journals such as Science et Esprit, The American Journal of Biblical Theology, Studies in Religion and has some forthcoming articles to be published in the next issue of Maritain Studies.  He has also written for magazines such as Crisis and Convivium and newspapers such as The National Post, City Light News, The Ottawa Citizen and The Times Colonist.