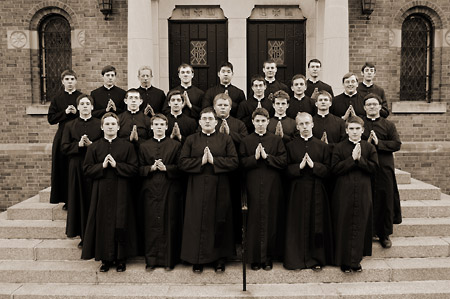 A blessed Friday to all, as we continue this journey through June, and soon into summer. Spring should bring hope, and the promise of new life.

But all is not rosy on the spiritual front, and I read with some dismay, although not much surprise, that the number of seminarians has dropped precipitously of late, especially in Europe and North America, a decline that began in 2012, and shows no signs of slowing down. The total number of Catholics has remained stable over the same time frame, at 1.299 billion souls, give or take a few, which sounds less dire, but is also not good news, for are we not meant to spread the one, true Faith, and should not that number be growing, precipitously? A ‘holding pattern’ was not part of God’s primordial command to ‘go forth and multiply’, and of Christ’s more supernatural divine commission to ‘make disciples of all nations’.

Alas. There are reasons for this, complex and multifold, but here is a brief thought: The zeitgeist in the air, even emanating from certain quarters of the Church, is that there is not really a ‘hell’. Well, there might be, but only the Devil is there, along with a few mangy, bitter angels, and God would not let any actual real live flesh-and-blood human being end up there. So why give up anything, and, ultimately, why not live as you desire? Why, in the context of the present discussion, give up the great joys of marriage (at least, so they are seen, but caveat nubens, et nubere non in festinatione), and adopt a sacrificial life of celibacy, obedience and poverty (but one filled with great supernatural joy) to ‘save souls’, if all souls are saved anyway?

Added to this pernicious and insidious metaphysical error, there is the corresponding milquetoast modern liturgy one finds in too many churches, a veritable happy glee-club, with the priest, pardon moi, ‘presider’, doing his presiding over a veritable weekly song-fest, guitars and swaying choirs, with the actual Liturgy buried somewhere within, a sermon designed to give no one any offence, a hurried canon and consecration, before an army of ‘Eucharistic’ ministers, almost all of the feminine persuasion, descend upon the sanctuary. Fewer come to Mass each year, with attendance at daily Mass counted on one hand, even fewer to Confession. Who now asks the priest for advice, his role reduced to an ‘administrator’ of various parishes mired in debt, and he himself, the vir Dei, mired in interminable meetings, in which he is often reduced to a semi-mute participant, a ‘presider’?

What full-blooded man would give up ‘everything’ for that?

There must be a real and honest reappraisal of the role and vocation of a priest, as a true alter Christus, deeply formed, disciplined and educated, who acts with virility, honour and courage, proclaiming the truth in season and out of season, not counting the cost, like Moses and Joshua of the Old Covenant, like Christ and the Apostles of the New, and like saintly priests in history too numerous to count (but peruse the stoic history of the Jesuit missionaries and martyrs); who will stand not only before God on behalf of the people, but also before Satan, the ‘accuser’ and ‘adversary’ seeking souls to devour; a man who is willing, even eager, to lay down his life for his flock, one of the many fruits of the detachment from the ‘world’ that the gift of celibacy offers.

I would not worry too much about the numbers, for, as Pope John Paul alluded when asked about the phenomenal growth of Islam, salvation is not a statistical game, but rather a very personal and individual choice, that we must make each moment of the day. The priests, through the sacraments they offer, especially the Eucharist, are the primary means we have to stay the course on our pilgrimage through life. God does not ‘need’ much to do His His work, a jar of meal, flagons of ordinary water, some loaves of bread, a few small fish, twelve uneducated Galileans, a few good fishers of men…

As the Devil admitted to the Curé D’Ars, if there were three priests like him, his kingdom would be destroyed tomorrow.