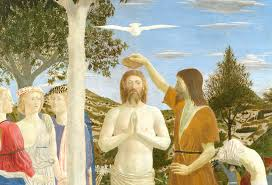 The Feast of the Baptism of the Lord marks the end of the Christmas Season and the beginning of Ordinary Time. It is a feast that has a foot in each season. It is part of the Christmas Season, because Christ has not yet begun his public ministry, but it is also the First Sunday in Ordinary Time. The celebration of the Baptism of the Lord is traditionally part of the threefold celebration of the Epiphany, which included the visitation of the Magi, the Baptism, and the wedding feast at Cana.

In the account of the His baptism, Christ comes to John the Baptist relatively unknown to the world. There are the select few who have already had privileged encounters with Him, such as the shepherds and the wise men in Bethlehem, but the average person doesn’t know anything about Him, because He has been living a secluded life in Nazareth with Mary and Joseph.

Up until this point, John is the one who has been drawing all the attention. For example, Luke says, “As the people were in expectation, and all men questioned in their hearts concerning John, whether perhaps he is the Christ” (Lk 3:15). “Multitudes” (cf. Lk 3:7) were going out into the wilderness to the place that he was baptizing in the Jordan River. John was a big deal. It’s difficult for us to grasp how big of a deal he was because we read the story already knowing that Jesus is the Messiah, but that obviously wasn’t the case for the multitudes going out into the wilderness to be baptized by John.

Despite his fame and the large following he acquires, John remains humble. He knows who he is and what his relationship is to Jesus. He says, “I baptize you with water; but he who is mightier than I is coming, the thong of whose sandals I am not worthy to untie; he will baptize you with the Holy Spirit and with fire” (Lk. 3:16). However, before we get to the baptism with the Holy Spirit and fire, we must first begin the journey.

John is preaching a baptism of repentance. Repentance, translating the Greek word metanoia, literally means after-thought, which is to say a change in soul. Jesus doesn’t need a change in soul because He is the perfect-souled man, but He does need to show us where our journey must begin. Where is that? At the Jordan River, just north of the Dead Sea. This is both the lowest point on earth and it is the border between the empty desert and the Promised Land. Repentance is recognizing that without God we are nothing – we are at the bottom of the earth in desert exile.

In Luke’s Gospel the baptism of Jesus is followed by His genealogy. Luke traces the ancestry of Jesus all the way back to Adam, the son of God. Adam was the first man, and sin entered the world through him. Jesus is the new man, who carries all of humanity with Him back to God.

So, this is where Ordinary Time begins. Ordinary Time is a rather unfortunate title. It’s a default name – derived not from our notion of ordinary, but rather from ordinal, as in, a succession of numbers – to describe the numbered Sundays that separate the four major liturgical seasons. It’s not a theological title like Advent or Christmas. Personally, I don’t like the title and I think it should eventually be changed back to the various seasons used before the calendar revisions of 1969; namely, the Time after Epiphany, Septuagesima, etc., and the Time After Pentecost. Thinking of this Sunday as “The First Sunday After Epiphany” puts it into a new light. Christ is revealed to the nations in the Feast of the Epiphany, and the necessary sequitur is baptism. If we have met Christ, we must be baptized. His public ministry begins with His baptism and our spiritual life begins with baptism.

In the weeks that follow the Epiphany and the Baptism of the Lord we enter Christ’s ministry in Galilee. We journey with the apostles as they get to know Christ, and this time of walking with Him, witnessing His miracles and listening to His teaching, carries us through to the season of Lent. It’s cold outside and the days are still short, so most people spend their evenings inside. Enjoy this relaxed time of preparation to build up your knowledge of Christ. Read through the Gospel of Luke. Read Pope Benedict’s Jesus of Nazareth or other classic works on the life of Christ. Don’t fall into the trap of thinking that Ordinary Time means we go back to ordinary life – Christ relegated to 45 minutes on Sunday. This is the time after Epiphany. It’s our time to sit with Christ at the wedding feast of Cana and on the hill of beatitudes. It’s our time to hop into the boat and set out into the deep on the Sea of Galilee. It’s our time to be strengthened by His words as He prepares us for the eventual journey to Jerusalem and the Cross. Enjoy this time after Epiphany.

Pope Sixtus and Companions, Martyrs To the End

The Message of the Transfiguration