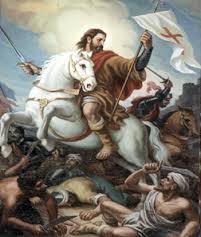 Before we leave Saint James the Greater and polygamy behind for now, two further factoids that came across my attention:  It seems the Mormons claim in their own tradition that the same very James, along with Peter and John, who are often linked together in the Gospels, appeared on a certain day in 1829 to Joseph Smith, the founder of their religion, bestowing the ‘priesthood’ upon them and their successors.

I would put the veracity of this claim up there with the giant golden tablets which descended from heaven, kept behind a veil, upon which the ‘Book of Mormon’ was engraved, and which only the Reverend Smith could read with special ‘glasses’.

Ah, well, it is easy to discount the claims of other religions, especially those which enter the realm of what Kant would call the noumena, that body of knowledge which transcends reason and empirical verification, or what he would call the phenomena. Hence, the necessity of faith in approaching such truths.

Of course, we as Catholics would hold that James the Greater, along with the rest of the Apostles, including the first Pope, would discount many of the claims of the Mormons, the ‘Latter Day Saints’, not least their original, and continuing, belief that polygamy is a noble enterprise fully supported by God Himself.  If they do continue in this claim, I would ask politely that they find their own saints.

The other historical claim, perhaps with more of a ring of truth, is that Saint James led the Spanish soldiers into battle against their Islamic oppressors in reclaiming their country, after the ‘Moors’, as Muslims were termed in the Iberian peninsula, streamed across the Strait of Gibraltar from North Africa in 711, eventually taking over most of what we now know as Spain.  Christians were eventually reduced to subservience and dhimmitude, as is usually the case under Islamic domination, repeated in our day.

It was a long, hard struggle for the Christian Spaniards to win back their country, one that lasted nearly eight centuries, but a victorious one eventually, after the fall of the last Islamic stronghold in 1492, under the vigorous and clear leadership of Ferdinand and Isabella.

Whatever the historical claims of Saint James as the Matamoros in the many pitched and desperate battles between the Christian and Muslim armies in those centuries (and we may hope that in our struggle with Islam things may reach a more peaceful conclusion), we at the least can claim him as an intercessor in the conversion of all hearts to the truth, so that the true faith may reign once again in as many souls as have eyes to see, and ears to  hear.