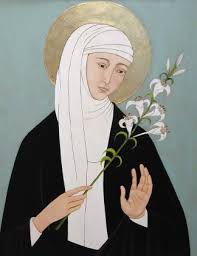 Saint Catherine of Siena, born in 1347, and who died on this day in 1380, was in no uncertain terms a remarkable woman.  Born into a family of 22 (!!) children (yes, all from the same parents without technological help), half of whom sadly died, Catherine showed signs of her uniqueness at an early age, eschewing the normal activities of young people, not least any interest in romance and marriage.  Interiorly, at the tender age of seven by her biographer, Raymond of Capua’s, account, she dedicated herself to Christ as his ‘bride’, and never looked back.  As she advised ‘build a castle within your mind, from which you can never flee’.

She became a Dominican tertiary, still a laywoman, but her followers were many, and she influenced the troubled Church of the 14th century more than most of the high-ranking men of her age. If we think the Church troubled now, try the era of what has come to be known as the ‘Great Western Schism’, with the Pope living in the scandalous court in Avignon in southern France (technically, papal territory).

Catherine was an early example of speaking truth to power, sparing no pains nor ‘standing on ceremony’ in urging the Holy Father, Gregory XI, that he must return the papacy to Rome, replete with dire threats she heard from God.  Catherine showed that there is nothing intrinsically wrong with ‘criticising’ the Pope, so long as it is done respectfully, with charity and good will, as the current Code of Canon Law states, quoted the Catechism:

In accord with the knowledge, competence, and preeminence which they possess, [lay people] have the right and even at times a duty to manifest to the sacred pastors their opinion on matters which pertain to the good of the Church, and they have a right to make their opinion known to the other Christian faithful, with due regard to the integrity of faith and morals and reverence toward their pastors, and with consideration for the common good and the dignity of persons. (CCC, #907; CIC, 212, #3).

Moved by her urging, the Pope did return to the Eternal City, the centre of Christendom, which began the process of healing the schism, complete at the Council of Constance in 1415.

(As an aside, we modern Catholics may follow Catherine’s example, and ask for clarification of some of the remarks of the current Holy Father.  To offer one example amongst others, I, a great fan of clarity and precision, and would not mind knowing what the Pope means by his recent condemnation of ‘proselytism’.  In today’s Gospel reading, recounting the ordination of the first deacons in the Church, Stephen and the others, Nicolaus is described as a ‘proselyte from Antioch’, which does not imply anything bad, but rather something good. Clearly, the Pope cannot mean that we should not evangelize).

I could go on, but perhaps we need a few more Catherines of Siena, steeped in prayer, chaste, pure, humble, obedient to Christ and His Church in the deepest sense.

Saint Catherine was one of the greatest of mystics in the history of the Church, and her dictated revelations, the Dialogue on Divine Providence, (from a woman who could neither read nor write), is a masterpiece of spiritual and theological insight, and her letters a model of beauty and intelligence, as well as masterpieces of early Tuscan. She is a powerful example and intercessor for women, as well as men, throughout the ages.