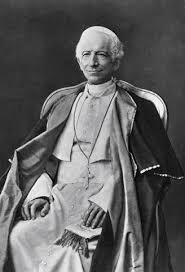 (During this time of crisis, we thought we would re-post this piece by Father Scott Murray, on the benefits of the Rosary on this memorial. I did not realize that Leo XIII’s ’88 encyclicals’ are the same number as keys on a piano, a veritable symphony, if you will. Anon, lege et orate, fratres et sorores….Editor)

Pope Leo XIII was, undoubtedly, a prolific writer of encyclicals. During his 25 year pontificate he wrote a total of 88 encyclicals. Leo wrote on diverse topics such as Church and State relations, education, socialism, Freemasonry, marriage, slavery, and the saints. His most frequent topic, however, was Marian devotion and the Rosary. The first of his eleven encyclicals dedicated to Our Blessed Mother was penned in 1883, Supremi Apostolatus Officio, and it gives a brief history of the Rosary, a defence of its merits, and a strong exhortation to pray it faithfully. He declares, “It has always been the habit of Catholics in danger and in troublous times to fly for refuge to Mary, and to seek for peace in her maternal goodness” (SAO, 2). The primary goal of these encyclicals is to promote the Rosary, through which the faithful will grow closer to Mary, and through Mary, Jesus.

The Pope repeats five themes in each of the encyclicals: The Church is facing troubling times, the Rosary is a powerful weapon with many benefits, he has experienced the benefits of the Rosary in his own life, history testifies to the power of the Rosary, and we need to pray it more often. None of the encyclicals, however, is a comprehensive treatise on devotion to the Rosary. The longest is only ten pages and the shortest is a mere two pages. They were each published in September to exhort the bishops to promote October devotion to the Rosary among their faithful. Although each is a worthwhile read, one doesn’t need to read them all to understand Leo’s position. My recommendation would be to read Magnae Dei Matris (36 paragraphs) and Laetitiae Sanctae (19 paragraphs) because they are the most comprehensive, they offer beautiful reflections on the meaning of the Rosary and devotion to Our Lady, and they outline a number of practical benefits to praying the Rosary.

What follows isn’t an exhaustive list of the insights contained in Leo’s Marian encyclicals. They are a summary of the benefits of praying the Rosary. They aren’t in any order of preference or importance. Some of them are repeated in each of the encyclicals and others are only mentioned once or twice. They are all worth praying for.