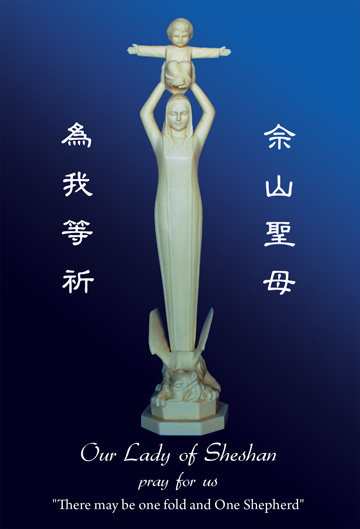 In 2008, Pope Benedict XVI declared May 24thas the world day of prayer for the Church in China, composing a special prayer through the intercession of Our Lady of Shesan, under Mary’s role as ‘Help of Christians’.

The Church in China is in a troubled state, especially since the long march of Communism under Chairman Mao, who, like so many other nations, established a Marxist government in China in 1949, to disastrous effect, with untold millions displaced and murdered. Mao also established a government-sanctioned-and-controlled ‘Catholic’ Church (officially, the ‘Chinese Patriotic Catholic Association’), persecuting members of the faithful Church, that is, those who remained faithful to Rome and the Magisterium.

The history of the Catholic Church in China is a long and complex one, dating back to the 13th century, and the Franciscan missionaries who first evangelized the vast nation. The Church maintained a small but tenuous hold until the persecutions in the 19th century, when the various dynastic emperors, invoking obscure and vague laws against ‘superstitions’, strove to crush the Church which, they thought (and rightly so), undermined their absolute and, to their minds divine, authority.

There were untold numbers of martyrs, whose blood, as Tertullian wrote in the third century, is the seed of Christianity. Hence, though small in number, the Catholics in China were exemplary in their fidelity and sacrifice, walking many miles to attend Mass, in the midst of great suffering and even the fear of death. Would that more of us occidental, and all-too-accidental, Catholics, many of whom seem to have a rather ho-hum attitude about the Holy Sacrifice, had even a drop of that same oriental zeal.

After Mao’s assumption of power, the Church and Catholics faithful to Rome went underground, resulting in the two ‘Churches’ in China, each with its own bishops and priests: the above ground ‘official’ one, whose bishops are chosen by the government and illicitly ordained, with sermons carefully monitored by governmental agents; and the hidden, but true, Church, whose bishops and priests have been ordained lawfully, but usually secretly, celebrating Mass and the rest of the sacraments in houses, waysides and wherever they are able.

As I commented recently, Pope Francis has tried to reach a rapprochement with the government, to bring the two Churches into unity. Yet how far can he go to find a compromise? The main question swirls around the choice of bishops, and it has always been Rome’s prerogative, ever since the investiture controversy of the 12th century, that the choice of bishops must ultimately be the Holy Father’s. For he who controls the bishops, in the end controls the Church. To relinquish that right would, as Cardinal Zen never tires of pointing out, spell the demise of the Church in an Erastian morass of Communist complaisance, ignoring the decades of sacrifice of faithful Christians, who done yeoman’s work in holding the Church together, loyal to the Vicar of Christ and, hence, to Christ Himself.

There are over a billion souls in China, so the future of the Church hinges to some large degree what happens in that vast and complex nation.