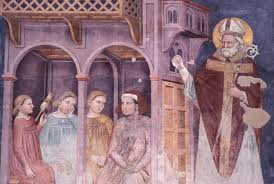 The common association with St. Nicholas of Myra, when rising above the traditional chubby gent decked out in vibrant scarlet array, is primarily one of charity. Around Yuletide and the Advent season leading up to it, we ponder the greatest gift which has ever been given, and its recipients are none other than all the members of humanity. We are thinking of the birth of Christ – God made Man, God’s complete offering of himself.

It is only understandable that the culture born out of this Catholic tradition of Advent produces a figure renowned for charity and generosity of bestowing gifts on children. One of the popular traditional tales which showcases the historical Nicholas’s charitable heart is that of the three daughters of the poor man.

The story, after generations of retelling, goes something like this: There was a poor family in Myra (where Nicholas was bishop) which consisted of three daughters and their father. The father had no foreseeable way of saving up enough money to pay for the dowries of his daughters. The women’s futures seemed doomed to be ones of enslaved servitude or else of prostitution. Even if they were not taken away by a pimp, one need only look at the millennia-long history of slavery to see that women, in particular, were frequently seen as sex objects in the eyes of their masters.

Being abused or submissively partaking in promiscuity has characterized female slaves from the time of the ancient Romans, as portrayed in the film adaptation of Quo Vadis (1951), to the age of the American plantations, the abuse during which is well-documented in works such as Harriet Jacobs’ Incidents in the Life of a Slave Girl (1861). Slavery, an injustice in itself, has historically been doubly ugly for women.

In the case of the family in Myra, there lingered a desperate dread for the wellbeing of the three maidens. Nicholas heard of their predicament and acted upon his charitable inclinations, secretly leaving a bag of gold to serve as a dowry for each woman on separate occasions. After the first two times this had occurred, the father decided to stay awake and keep an eye out for who might be delivering this gold to them. The man seemed to be taking to heart the caution of Christ in Matthew 24:42, “Therefore be on the alert, for you do not know which day your Lord is coming.” As in anticipation of the Son of Man, who said he would come like a thief in the night, so the poor man of Myra remained alert, waiting for his mysterious benefactor who also came like a thief in the night. And, like Christ, this visitor brought peace and goodwill with him.

So the man waited, and he was not disappointed. Nicholas returned a third time to repeat his charitable work, and it was in this last endeavor that he was found out. The man was grateful, but Nicholas requested him to keep his identity as the benefactor a secret. In essence, St. Nicholas was the very first Secret Santa.

Nicholas is the patron of numerous walks of life. He is a patron saint of children and of sailors, but he is also the patron saint of prostitutes. This last patronage is likely bestowed upon him on account of the story of the three poor maidens of Myra and the trouble they found themselves in. Despite that, it may seem odd to us that there is such a thing as a patron of prostitutes.

After all, when we consider invoking the intercession of a patron saint, it is often out of the desire to grow better in handling a certain aspect of our lives. For instance, if a writer deliberately prays to St. Francis de Sales, knowing he is the patron of writers, the writer seeks to become a stronger writer, a better writer, and elevate his or her work to God. But when we come to the practice of prostitution, it is right away different from other professions. This is because prostitution is a direct and voracious act for self-gratification in and of itself, eliminating the elements of authentic love and potential procreation from the sexual act.

Prostitution is legal in certain parts of Nevada and elsewhere. In numerous countries which fall somewhere below the status of first-world nationalities, prostitution is picked up by many girls at a particularly tender age. The selling of one’s body to others becomes a lifestyle, one in which it becomes difficult to see one’s own inherent value when the person is serving in one of the most objectifying capacities imaginable.

Even in Christ’s day and age, prostitution was widespread. How did our Lord treat prostitutes themselves? He treated them with respect and genuine love, charity, mercy. No one had ever shown a prostitute mercy, let alone any sort of authentic love. The only relations prostitutes had at that time were when they permitted themselves to be objectified by men, marketing their bodies as the utmost attribute of their existence or when they were being rebuked and struck by those who took upon themselves the divine right of judgment. This was the limit of their human interaction: a life with no visible sign of authentic love. And this is the condemned existence of one living in such a state of mortal sin.

Christ enters the scene and shows mercy, forgiveness, and true love to the grave sinners of the ancient world, and prostitutes are among them. When sinners show repentance and alter their life’s direction from their former paths of darkness, Christ shows charity. But, of course, he calls for his followers to deny sin, the world, and the flesh.

St. Nicholas, like all those who grow close to Christ, become like him in word and deed. Nicholas is one of God’s saintly reminders reaffirming the notion of conversion. He also reflects Christ’s charity. He is the patron of prostitutes not because he can make prostitutes better in their performance; he can’t. Instead, he is the patron saint of prostitutes as he is meant to be invoked to be delivered from prostitution, just as the three maidens in Myra were – and on his account.

A patron saint is invoked in requesting a better manner of living. In the case of St. Nicholas, one of the causes designated to him is that of prostitutes. How do prostitutes live better? By removing themselves from sin – no longer being a prostitute, in other words. The practice of prostitution as seen in modern society is just one aspect of a culture inclined toward deifying sex as the epitome of our existence, of the ultimate fulfillment of physical capability.

Furthermore, the idea of spiritually healthy sex has been severely damaged as culture’s view on the conjugal act has become merely a gratification for the self. Too seldom is it seen as an act of humility, of sharing of self with another instead of a perpetual act of taking, only feeding selfish desires. Prostitutes allow others to take from them, to use them. And at the same time prostitutes make spiritual victims of their briefly-entertained partners, a danger which so many of the Old Testament proverbs and passages warn about. It is a vicious cycle of taking and of allowing one another to be taken advantage of, for all they seek is pleasure for its own sake and not the natural, stable relationship God intended for the sexes. It is aspects of our social thought process such as this that perpetuate a culture of death.

Commemorating St. Nicholas in a season of joy, of anticipated change and future victory, sheds light on how we ourselves are to live amid just such a culture. He faced a similar one in his own day as we have seen; it was also one which presented persecution for Christians. But his acts are an example for us. We are called to show charity to all, both to those who have found the truth and to those who seem disinterested in seeking it.